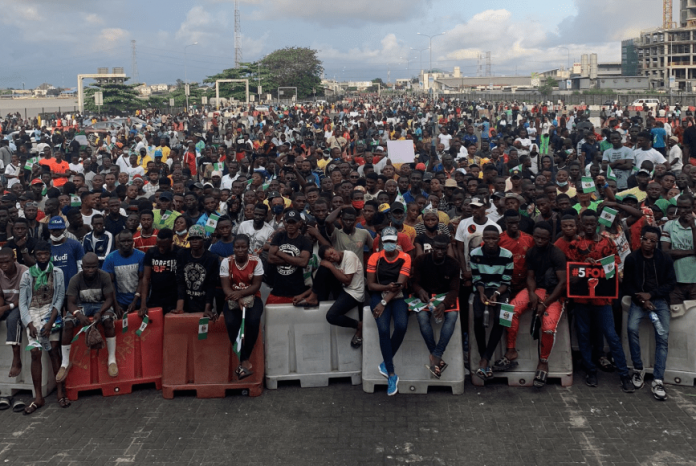 Fifteen persons who claimed to have been shot during the #EndSARS protests in Lagos appeared before the Lagos State Judicial Panel of Enquiry and Restitution for Victims of SARS Related Abuses and Other Matters on Friday to narrate their ordeal, The Nation newspaper reported.

According to the daily, they said they had come to debunk claims by the Nigerian Army that nobody was shot or killed at on the night of October 20 at Lekki Toll Gate.

Led by their lawyer, Mr Adesina Ogunlana, several of them with Plaster of Paris (PoP) and bandages around their legs, arms, heads and chests, said they were hit by bullets as they protested at the toll gate.

According to their lawyer, 14 of the protesters were shot at the toll gate on the evening of October 20 while the 15th was shot at Ojodu Berger in Lagos.

Recall that the Nigerian Army denied shooting or killing anyone at Lekki, saying it merely fired blanks into the air to disperse stone throwers.

Dabiraoluwa Adeyinka claimed yesterday that families of victims and hospitals were being threatened or offered money to keep mum.

She identified some of the hospitals to include “Igbobi, LUTH, LASUTH, Ikeja and Reddington.

Dabiraoluwa said: “We took dead bodies to Reddington….All of them told us that that they cannot give us the data.

“I went personally to see their doctor. I met the HR and he told me to give him 24 hours to provide the database of all these people. Till date, he has not gotten back to us.

“Can this heal their wounds? Can it replace their amputated legs? Can it bring back the dead? We just want justice. People were shot at. I saw it. They tried shooting at me. Someone else took my bullet.”

Continuing, she said: “We don’t want to be marginalised in our own country; that is why we have come here today, to show victims.

“They said nobody was shot at, they said nobody died. We have accounts of people that died. I was there on that stage. I was the one telling people, ‘Sit down! Don’t run!’ People died. People are still at the emergency ward as I speak to you now.”

She did not say who offered the bribe.

One of the delegates who identified himself as Nathaniel Solomon alleged that his younger brother, Abouta Solomon, was shot dead and has since been buried in his hometown in Mubi Local Government Area of Adamawa State.

He brandished a picture of Abouta lying dead on grass.

His words: “The person in the picture is my younger brother, Abouta Solomon. We’re from Mubi North Local Government Area of Adamawa State.

“My brother was shot at Lekki Toll Gate on October 20. It was the army that shot him.”

Asked why he knew it was the army, Solomon said: “Because some boys that he was with told us that he had been shot, so we rushed there and picked up his corpse.

“I didn’t know when my brother left home for the toll gate. He never told me he was going there. He was living with me here in Lekki, at Marwa.

“Some boys called me. By then, my phone battery was flat. The phone had gone off.

“They called one of our brothers and told him that Abouta had been killed. So, we went there, found him on the grass, picked up his corpse and we went to St Paul’s Mortuary at Oyingbo.

“His corpse was at Lekki Toll Gate. There were people around at the time, protesters. He was laid on the grass that was growing on the road divider in middle of the road. He was already dead. We took him to St Paul’s Mortuary at Oyingbo. One of my brothers had a car, so we drove down there.”

One Edwin Augustine who also claimed to be a victim came on crutches.

He said he did not see who fired the shots that pierced his thigh, and that his companion was hit first around the chest area.

Augustine said: “I was shot on October 20 at Lekki Toll Gate. I didn’t see who shot me.

“I was at the snooker board. I heard gunshots. The first one was in the air. The second was direct to people.

“I wanted to follow someone to the charging spot to collect my phone, but he was shot right beside his heart. Immediately he fell, I tried to turn and check what was wrong and I received mine on my thigh. I fell and I was there unconscious.

“When I woke up the next day, I saw myself at the hospital.”

He said he had been receiving treatment at the Lagos State University Teaching Hospital (LASUTH).

Another survivor, Damilola Ogunleke, with scars on his head, said a bullet hit him on the head and that he had undergone two surgeries already.

He said: “I was shot in the head, but I didn’t see who shot me. It happened on the protest ground, Lekki Toll Gate on the night of October 20, near Access Bank.”

’My brother was shot in the head’

For Aiyedungbe Olufunmi Grace, her brother, Aiyedungbe Gabriel Ayoola, died on November 12 at LASUTH after allegedly suffering gunshot wounds in the head.

She said: “He died on November 12. He had been at the hospital since the incident happened. He was shot in the head. We were looking for him, we didn’t know at first because he didn’t live with us. It was a Good Samaritan that rescued him and took him to the hospital.

“We had been looking for him, calling his phone. I don’t know who took his phone when the thing happened. The person was charging it and it was ringing but nobody was picking.”

She explained that Gabriel’s picture was made into a poster and had been circulating on WhatsApp without her family’s knowledge.

Grace said: “(It was) somebody who saw the poster that was made asking that he be connected with his family that sent the picture to me on WhatsApp. That was when we went to LASUTH.

“It was after about 19 days that we went to LASUTH. They said he was in coma for like two weeks. By the time we got there, he was already moving his fingers. He had already opened his eyes.

“But later at some point, the medical people told us they wanted to do an MRI scan and the whole thing was taking like forever.

“At some point, they said he needed collar; that they needed to know what was going on in his chest. Someone even offered to go and buy the collar only for one of them to come and tell us that we shouldn’t, that they would supply the collar.

“Till my brother breathed his last, we didn’t see the collar. They prevented us from buying it ourselves. What eventually killed my brother was negligence on the part of the medical practitioners.”

Asked how she knew Gabriel was an #EndSARS protester, she said: “Someone sent something to me on WhatsApp. It was a poster of him. They wrote ‘#EndSARS victim. Please help us connect him with his family,’ something like that. That was what I saw that we traced to LASUTH….

“He was taken to the hospital. When we got there, they said he was part of the #EndSARS protesters; that somebody brought him in. They told us the ward where he was and we met him there.”

Responding to a question on when and where her brother was shot, Grace said: “They didn’t tell us. When we got to the hospital, they only asked us to prove that we were his family and we brought his picture, birth certificate and the likes.”

She explained that she had no way of proving that Gabriel was shot at Lekki Toll Gate or elsewhere.

She accused the hospital of a cover-up.

“I think there is a cover-up going on somewhere, because at some point after he gave up, they said they wanted to carry out an autopsy on him to determine what killed him, because, according to them, some people that were shot on the head did not later die…

“When we asked for an autopsy to be carried out on my brother’s corpse to determine if it’s actually true that he died of COVID-19, this doctor was telling us that there was no need for it. We have all the voice recordings.”

Share your thoughts on the story 15 Lekki Shootings Victims Storm Lagos Panel to Counter Nigerian Army’s Claims with Nigerian Sketch in the comments section below.