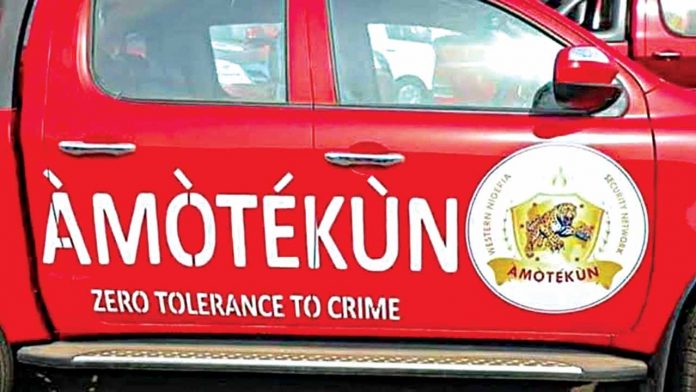 The State Security Network Agency, otherwise known as Amotekun, was established to track criminals in Oyo State, notwithstanding the ethnic or religious affiliation of such criminals.

Special adviser on security matters to Oyo State governor, Fatai Owoseni, disclosed this on Wednesday, while speaking in an online interview programme, The Roundtable, with The Punch.

Owoseni said Amotekun operatives are only criminals of whatever kind in the state, not specifically after Fulani herdsmen or cattle breeders under the banner Miyetti Allah group.

He said every incident involving Amotekun must be thoroughly investigated, explaining that the recent news of clashes between the security outfit and Fulani herdsmen is being looked into and that the outcome of the investigation will soon be made known.

He therefore urged the public to await the outcomes of the findings.

News of Amotekun clash with herdsmen broke last week, and allegations of recklessness and extrajudicial killings have been leveled against the security outfit.

Owoseni said most of the arrested kidnap suspects are from a particular group, and that the Oyo State Police Command was in a better place to reveal the identities of the suspects.

Share your thoughts on the story Amotekun Doesn’t Care about Criminals’ Ethnicity, Religion with Nigerian Sketch in the comments section below