Bindow Returns to Adamawa for the First Time after 2019 Elections

Bindow has not been to thevstate since he lost in his bid to be returned as Adamawa State governor in 2019.

The town of Yola in Adamawa state went agog as residents came out enmasse to welcome the former governor who some of them described as “kind-hearted and progressive.”

Nigerian Sketch was told by one of his aides that he touched down at Yola International Airport on Saturday and was greeted by a mammoth crowd who then escorted him to his residence. 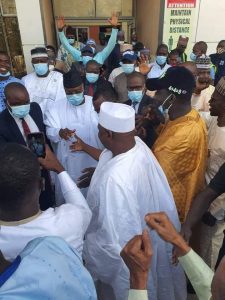 Aminu Ahmadu, APC north-east party stalwart, described the development as encouraging, saying it has put all those spreading “rumours of Bindow’s political stagnation to shame.”

Bello Hamidu, a civil servant in the state, said the Bindow’s return represents “a ray of hope for the state and prayed that the people would continue to support his political endevours in delivering quality leadership in Adamawa state.”

Politicians and people from all walks of life have continued to troop Senator Bindow’s residence to pay homage to the former governor and wish him well.

In Mubi, the hometown of Bindow in Adamawa state, residents are in an upbeat mood over reports of the former governor’s return.

Sadiq Abdullteef, who had a working relationship with the former governor, said “his return to Adamawa is an indication that he takes the state’s matters seriously. When you come out of a political engagement like that, you need to take time to reassess your stakes.

“He had behaved like a statesman by refusing to intervene in the running of the affairs of the state by the present administration so that peace will reign for the benefit of all.”

It could be recalled that the Senator Bindow has not visited the state since 2019.

Share your thoughts on the story Bindow Returns to Adamawa for the First Time after 2019 Election in the comments section below.