Over 40 Nigerian farmers have been killed by suspected terrorists in Borno State on Saturday, reports have confirmed, and President Muhammadu Buhari has reacted to the killings by saying his administration has given all necessary supports to the Nigerian armed forces to secure the nation.

The terrorists killed all the victims by slitting their throats and dumping their dead bodies on a rice farm in Koshebe area of Zabramari village in Jere.

Reports also said the insurgents destroyed the rice plantation after slaughtering all the farmers, and President Muhammadu Buhari described the killings as insane.

Because the incidence happened late in the afternoon, local hunters were said to have been engaged to search for the dead bodies, and they have retrieved 43 bodies of farmers found dead, with their throats slit.

Reports confirmed that the bodies were taken to Zabarmari village, two kilometres away to await burial rites that would be performed on Sunday. President Buhari said through his spokesperson, Garba Shehu’s verified twitter handle late Saturday that his administration had given all the required support to the armed forces “to take all necessary steps to protect the country’s population and its territory.” 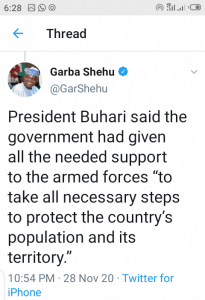 It was not immediately clear if the president was trying to indict the armed forces for not taking “all necessary steps to protect the country’s population and its territory”, but he appeared to be saying his government had done what it needed to do, but the armed forces have failed to discharge their duties.

Borno State governor, Babagana Zulum, was expected to take part in the burial rites on Sunday as he had insisted to see all the corpses before they were buried.

Share your thoughts on the story Buhari Indicts Armed Forces as Terrorists Slaughter 43 Farmers in Borno Rice Farms with Nigerian Sketch in the comments section below.