Nigeria’s chief of army staff, Tukur Yusuf Buratai, who the army announced few days ago has gone into isolation due to contact with a COVID-19 victim, may have breached the global health protocol on coronavirus, the presidency has inadvertently revealed.

A personal assistant on media to President Muhammadu Buhari, Bashir Ahmad, announced on Sunday that Buratai had come out of isolation against protocol, and has even left his Abuja base to Katsina State.

Bashir tweeted on Sunday that “The Chief Staff General, Tukur Buratai is in Kankara, Katsina State as the Army, Police and other security personnels intensify to rescue all abducted students of Government Science Secondary School, Kankara.” 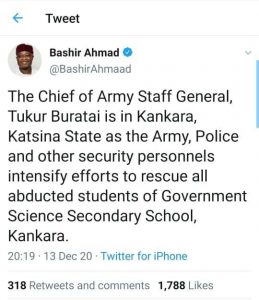 While most Nigerians were replying to Bashir on Twitter, asking why President Buhari has not visited Kankara since he is presently in Katsina State, a medical doctor, M. S. Ibrahim was more concerned with the health implication of Buratai’s breach of protocol.

He replied to Bashir, asking: “He is no longer on COVID-19 isolation? Lol!”

The media in Nigeria reported widely that Buratai, general officers commanding (GOCs), field commanders and other participants, who attended the Chief of Army Staff Conference last Tuesday, have gone into isolation following the death of the GOC 6 Division, Nigerian Army, Port Harcourt, Maj. Gen. Olubunmi Irefin, who died of complications arising from COVID-19.

Irefin’s death was said to have caused panic in military circles, especially amongst those that attended the conference most of whom have undergone tests to ascertain their status.

It was also reported that Buratai has barred participants at the conference from attending the wedding of his son, Hamisu, which took place Friday.

Most of the commanders were told to conclude their isolation and treatment process in Abuja before returning to base except on medical clearance.

Bashir did not reveal in his tweet that Buratai obtained a medical clearance.

Share your thoughts on the story Buhari’s Assistant Reveals how Buratai Breached COVID-19 Protocol with Nigeria Sketch in the comments section below.