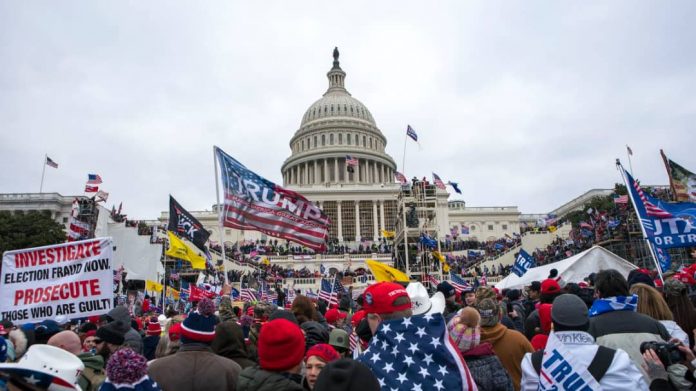 CAPITOL INVASION: Comparing Power of Incumbency in Nigeria and the US

A huge lesson to learn from the US as the so-called democratic mother of all nations is that incumbency gives rise to abuse in a desperate bid to hang on to power.

That is a lesson worth learning.

In a display of what in other countries would be termed as barbaric and uncultured, thousands of Trump supporters stormed and vandalized the Capitol building and had a field day while doing that, snapping selfies and eating snacks while at it.

While their actions in the West would have all kinds of explanation, even if condemned, to us Africans, it has just one meaning: unhealthy clinging to power by all means.

This is not any different from the use of thugs to disrupt civil activities in the name of political partisanship here in Nigeria.

Different opinions indicate that the nature of the American style ‘mobbing’ as self-expression could be different from, for example, the kind we see on the African continent, or in Nigeria to be precise. But the truth is, they all amount to using chaos and disorder as a last resort.

Let’s analyze the electoral violence experienced in the recent elections in Nigeria and in the process try to find a similarity to what happened in Washington D.C earlier last week.

In Nigeria, ordinarily money is offered to hire the service of the gang members. These are the ‘yan dabas’, ‘yan sara suka’, ‘yan kalare’, ‘yan daga’, ‘area boys’ etc. depending on the state in question. These broad nomenclature, in a nut shell, means just one thing; thugs. Drugs, recreational drugs and marijuana are made available to stimulate the youth to allow them carry out their jobs efficiently, which often means ruthlessly.

It has become a business where these gang leaders are making money, getting allocated lands from administrations they helped to put in office using violence.

The high-stake nature of the Nigerian elections, where the winner takes all makes elections more prone to violence and hence the flourishing of the ‘violence business’.

The Council for Foreign Relations published a study on its website where comparisons of election violence in Nigeria was made to track the trend.

“The quality of the electoral process (not just election day), whether politicians accept the results, and the messages they send their supporters can have a huge impact on post-election violence.”

Perhaps that is where things likely go wrong in the US scenario. Is it possible that the Trump supporters were offered money and given marijuana to motivate them into doing what they did? We don’t have to ascertain that but what is important is the fact that Trump as incumbent has (or had) the capability of rallying supporters and also gives him the gut to do what was witnessed in the Capital of the United States.

The availability of resources including money, the police, the shear position, etc often gives incumbent governments in Nigeria the audacity to resort to violent measures in the name of power retention.

However, in Nigeria, there are ample scenarios at all levels where power is peacefully ceded from the vanquished to the victor without the likes of the qualms the Trump supporters have shown.

Share your thoughts on the piece CAPITOL INVASION: Comparing Power of Incumbency in Nigeria and the US with Nigerian Sketch in the comments section below