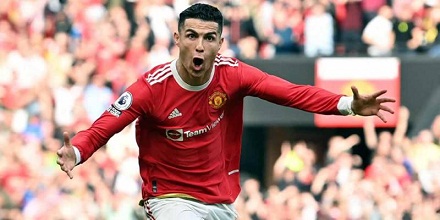 Cristiano Ronaldo will reportedly receive a bonus of £850,000 (just over €1m) following his hat-trick in Manchester United’s 3-2 win against Norwich on Saturday.

As reported by The Sun, the Portuguese international triggered a bonus-related clause in his contract after reaching 21 goals for the season.

The 37-year-old will also receive £100,000 for each further goal he scores in United’s remaining six matches this season.

With Ronaldo currently 12 goals ahead of closest challenger Bruno Fernandes in the Red Devils’ top scorers list, the former Real Madrid man is likely to receive an additional £1million for finishing as the club’s top goalscorer.

Moreover, Ronaldo – who has registered 21 goals this season – would receive around £2.75million in total payments if he manages to hit 30 goals by the end of the campaign.

Ronaldo has received some criticism at times this season, however, he has played a vital role in keeping the Red Devils’ hopes of finishing in the top four alive.

The forward, who has also made three assists this campaign, bagged a hat-trick in United’s 3-2 victory over Tottenham Hotspur last month.

He repeated the feat against Norwich at Old Trafford on Saturday, with Dean Smith’s men having come from behind to draw level at 2-2.

The 37-year-old opened the scoring in the seventh minute, before grabbing his second with a header. Norwich levelled through Kieran Dowell and Teemu Pukki, but Ronaldo’s 76th-minute free-kick secured all three points for United.

With both Spurs and Arsenal suffering defeats at the weekend, the victory saw United move up to fifth place, three points adrift of Antonio Conte’s side.

Share your thoughts on the story Cristiano Ronaldo earns over €1m bonus after hat-trick against Norwich City with Nigerian Sketch in the comments section.