Persistent conflicts between herders and farmers in Kano State have been reduced significantly in the last few years, according to testimonies from participants in a conflict management project in the state.

During the close-out ceremony of the project titled ‘Strengthening Community Engagement towards Peacebuilding and Conflict Management in Kano State’, at on Friday, participants, especially from conflict-prone areas such as Rogo and Sumaila local government areas.

The Civil Society Organisation for Conflict Resolution in Nigeria (CS-CRIN), which implemented the project, said it mentored a number of civil society organisatons and non-governmental organisations to serve as agents of citizen-driven transformation that will result in high-level transformation for development.

The project was funded by the 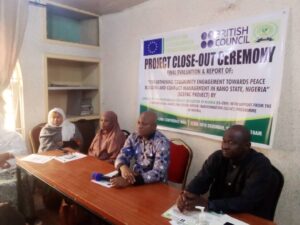 CS-CRIN’s national coordinator and executive director, Adeniyi Aremu, said 84 activities were carried out on the project, while 120 peace advocates were inaugurated in the state.

He said conflict between herders and farmers were approached from a communal perspective and the results were encouraging.

Some of the CSO’s that benefitted from CS-CRIN’s mentoring were on ground to narrate their experiences.

Share your thoughts on the story CS-CRIN mentors CSOs, resolves herders-farmers conflicts in Kano with Nigerian Sketch in the comments section.