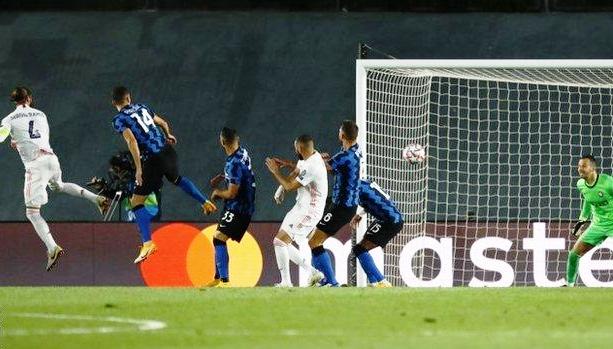 Does Sergio Ramos’ 100th Goal for Real Madrid Make Him Best Center-Back Ever?

Sergio Ramos‘ header gave Real a 2-0 lead against Inter Milan as they eventually won 3-2 for their first Champions League win of the season.

Ramos continues to make his case as the best center-back in the sport today, turning in a stellar performance in Real Madrid’s UEFA Champions League victory over Inter Milan on Tuesday.

It was a historic night for the 34-year-old star as he netted his 100th career goal at the 33rd minute of the match, delivering a header off Toni Kroos’ corner that gave his team a comfortable 2-0 lead.

Although Inter Milan retaliated and managed to tie the ball game at 2-2-, Zinedine Zidane’s men were able to break the deadlock to walk away with their hands raised in triumph.

That was his 55th header for the club – on top of 21 penalties, two free-kicks and 22 goals using his feet from open play.

“It’s not bad,” the 34-year-old said. “Individual records are secondary, but you like hitting them. As long as they keep on helping the side win then hopefully I can get a few more.”

He has scored 14 Champions League goals across 11 seasons (only Raul and Karim Benzema have scored in more Champions League seasons for Real than Ramos). He has netted a record 74 in La Liga (including two for Sevilla), seven in the Spanish Cup and a smattering across other competitions.

In total he has played 659 times for the club and won 22 trophies.

Ramos has scored 23 goals for Spain – which makes him the top scoring defender in international history – and another three for Sevilla, giving him a career total of 126 goals.

He became the top scoring defender in La Liga history back in June, overtaking Ronald Koeman’s record of 67.

He is only the 21st player to score 100 goals for Real, taking him level with Fernando Morientes. He is five goals behind Gareth Bale and four off Brazil legend Ronaldo.

Ramos has scored some crucial goals for Real, including in the 2014 (an injury-time equaliser) and 2016 Champions League final wins against Atletico Madrid.

He has scored five goals against Barcelona, including an 82nd-minute winner and 90th-minute equaliser.

However, the Spaniard is not the highest scoring defender of all time.

Daniel Passarella – the previous highest scoring international ever (22) – is thought to have scored 175 goals for Argentina, Fiorentina, Inter and clubs in his homeland in the 1970s and 1980s.

Current Barcelona boss Koeman scored about 250 goals for teams including PSV, Barca and the Netherlands but played a significant amount of his career in midfield.

Ramos is not even the top scoring defender for Real yet, although – like Koeman – Fernando Hierro also played in midfield. He scored 124 goals for the club, and another 30 for Spain.

Share your thoughts on the story Does Sergio Ramos’ 100th Goal for Real Madrid Make Him Best Center-Back Ever? with Nigerian Sketch in the comments section below.