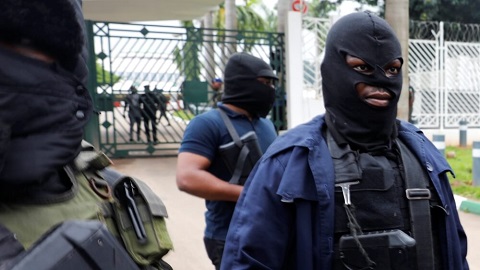 A suspected Boko Haram leader was arrested in Abeokuta, Ogun State on Sunday by operatives of the Department of State Security Service (DSS).

Daily Trust reported that the suspected Boko Haram leader was arrested at Ijaye area of Abeokuta.

The newspaper quoted a source who said the suspect initially put up a resistance before bowing to the superior power of DSS operatives.

The source said operation was carried out at night on Sunday.

The suspected terrorist reportedly arrived in Abeokuta from Katsina, took up security job at Ijaye, while gathering intelligence for terrorist attacks.

A security source was also quoted to have said the terrorist moved to Abeokuta to set up terrorists’ cell for kidnapping and terror attacks.

However, security operatives stormed his hideout and picked him up.

“It was not an easy ride. Intelligence and the grace of God were sufficient for the operatives. There are still many of them around, but we are on top of our game,” the source said.

There are recent reports of alleged plan of terrorists to attack some states in the South West.

DSS spokesman, Dr Peter Afunanya and police public relations officer in the state, Abimbola Oyeyemi, have kept mute on the arrest as of the time this story was published.

Share your thoughts on the story DSS trails, arrests Boko Haram leader in Ogun with Nigerian Sketch in the comments section.