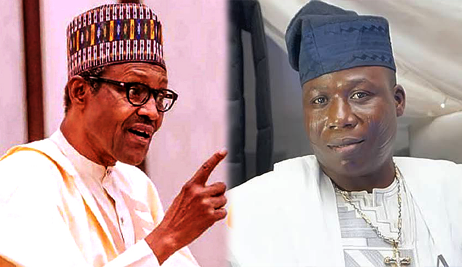 President of the Oodua Worldwide, Prince Adewale Ojo, has said that the attack on the home of Sunday Igboho, which the Department of State Service (DSS) said it carried out on Thursday, was part of the ethnic cleansing agenda of President Muhammadu Buhari’s government.

He said this a press release, adding that “At this point, we may not be too wrong to assume that this recent attack was a furtherance to the conceived ethnic cleansing by a section of the country who are bent to dominate and force the rest of us to an underdog in a country that constitutionally bequeath egalitarianism, equal rights and justice for all.

“Two souls were reported to have been lost to these marauding attackers, with their corpses taken away. Scores of people, including the wife of Chief Ighoho, were also taken away. This is not only barbaric but sad.

“We here state categorically that the only way peace and tranquility can reign in Nigeria is for government to restore hope that a new Nigeria is still a possibility. Anything to the contrary will pose a serious danger to the unity of our country, Nigeria.

“We, therefore, declare that this attack on Chief Ighoho’s house by the DSS was rather unfortunate, cruel, irresponsible, illegal and atrocious.

“We make bold to say that we shall hold the Buhari led administration responsible for this barbaric attack if nothing is done in record time to condemn the act and redresses made to assuage frayed nerves on this very dastardly act.

“And should there be no response to our request within 72 hours, this recent action will be taken as a declaration of war against our peace-loving people. A stitch in time can save more than nine..”

Share your thoughts on the story DSS’s Attack on Igboho Part of Ethnic Cleansing by Buhari’s Govt with Nigerian Sketch in the comments section below.