Nigeria’s president, Muhammadu Buhari said late Thursday he had instructed the inspector-general of police (IGP), Mohammed Adamu, to find a lasting solution to the excesses of the Special Anti Robbery Squad (SARS) about which Nigerians have been protesting.

“I met again with the Inspector General of Police tonight. Our determination to reform the police should never be in doubt. I am being briefed regularly on the reform efforts ongoing to end police brutality and unethical conduct, and to ensure that the Police are fully accountable to the people. 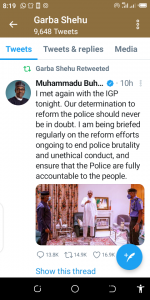 “The IG already has my firm instructions to conclusively address the concerns of Nigerians regarding these excesses, and ensure erring personnel are brought to justice. I appeal for patience and calm, even as Nigerians freely exercise their right to peacefully make their views known.

“The vast majority of men and women of the Nigeria Police Force are patriotic and committed to protecting the lives and livelihoods of Nigerians, and we will continue to support them to do their job.”

Nigerians have however sent mixed reactions to the president’s position, with some insisting that SARS should be scrapped while others demand for a significant overhaul.

Ayo Sivan Siyanbola Senior said on Facebook that “Something drastic has to be done to reshape our Police Force. The degeneration has been alarmingly uncomfortable for a nation like ours.” 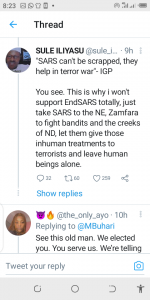 Aworinde Dele however said “The Nigerian Police Force is unreformable. I disagree with Mr President that majority in the Police are good people. Majority of men and officers in the Police are bad and rotten eggs, that is why the people are shouting. Every organization has bad please, but when bad is higher, then there will be problem. Very few can be considered half good.

“Though if we have right people appointed as IGP, the force can be made better. ….To me the Police and armed robbers work together.

“If you see the bragadocio the police are displaying right from Kwali Abuja here you will know they have backing from the top officers in force headquarters. They closed road causing hold up, just to collect money and big men of Abuja passes the road.” 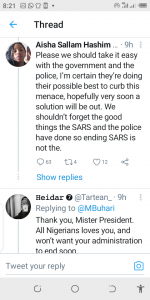 Akinlawon Akintunde said “This is the worst IGP ever appointed. He has no control over officers on Highways or he is collecting the tolls gathered on the road. There truly are committed men and women in the Nigeria Police. But certainly not in the majority.”.

Aisha Sallam Hashim responded directly the president’s tweet saying “Please we should take it easy with the government and the police, I’m certain they’re doing their possible best to curb this menace, hopefully very soon a solution will be out. We shouldn’t forget the good things the SARS and the police have done so ending SARS is not the solution, I think a reform will be better. Remember police is your friend.”

The #EndSARS protests have continued, especially in Southern Nigeria where opposition has been virulent against the brutality of the special squad. 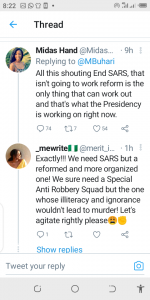 Share your thought on the story #EndSARS: Buhari Rejects Scrapping of Squad, Pledges ‘Conclusive’ Reforms  with Nigerian Sketch in the comments section below.