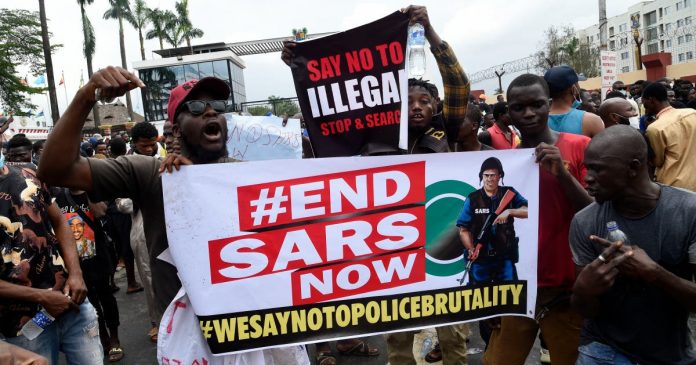 #EndSARS campaigners in Nigeria have vowed to come out to protest again despite government’s insistence on stopping a new wave of protests, given the way the earlier ones got out of hand.

Armed policemen and soldiers have been rolled out to man strategic positions in Lagos and Abuja in anticipation of the protests.

It was not clear as of the time this story was published whether the armed security personnel were deployed to scuttle the protests or to secure the protesters and other citizen, but President Muhammadu Buhari had said on Monday that his administration would not tolerate another breakdown of law and order across the country.

The campaigners however took to the social media to lambast the president as policemen and soldiers took over the Lekki toll plaza and the Gani Fawehinmi Freedom Park, Ojota, at midnight.

Bassey Israel, one of the campaigners whose bank account has been frozen by the Central Bank of Nigeria tweeted: “The second wave of #EndSARs protests has started. Are we happy? Yes! Are we coming with supports? Yes! Are we coming harder? Yes! Are we supporting online? Yes! All you need to do is retweet aggressively!”

@Adeoye Keshinro said there was a need to use drones to monitor the next protests, tweeting, “As we continue the protests, a drone will be required at all protest grounds. Please help retweet for people to see.”

@SmilingPen tweeted, “As far as what we are advocating is a livable country and not for APC or PDP, we will not stop! We are youths, we are not terrorists, we want and deserve a better Nigeria, we are not opposition parties; we are equal Nigerian citizens!”

@precious_oli described the fresh round of protests as a fight against oppression that must be won.

“This is probably the finale of this fight. If we put this fight aggressively, we would win against the oppression of this corrupt system and change the narrative forever. So why won’t you give it your all. They would try to suppress us but we would never stop saying #EndSarsNow,” @Precious_oli tweeted.

He added that the constitution allowed for peaceful protests and no one must be cowed.

@ElaigwuG tweeted, “The government must #EndSarsNow. I want a better future for my children and the unborn generation so that they will look back and be proud of the decisions we took today.

“#EndSarsNow Nigeria is sick! How can the common man survive? The naira is becoming more useless by the day… sometimes I wonder who do us this thing. They will use ethnicity or religion to always close the youth mouth to do more evil and damage to the country.”

Share your thoughts on the story #EndSARS Campaigners Vow to Continue Protests despite Security Presence with Nigerian Sketch in the comments section below.