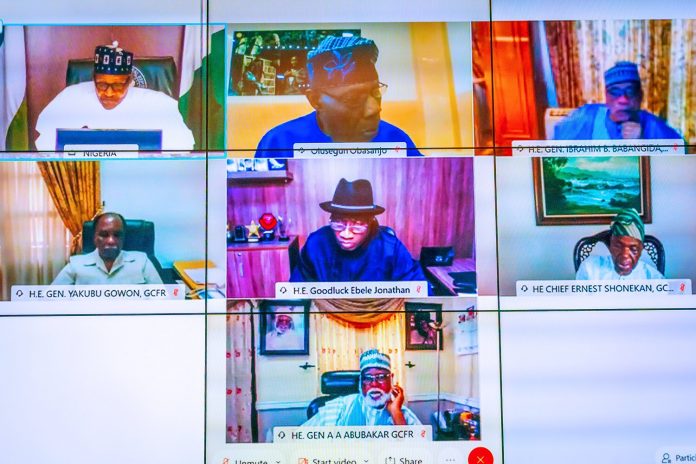 Nigeria’s president, Muhammadu Buhari, told former Nigerian presidents that his government will not fold its arms and allow miscreants and criminals continue to perpetrate acts of hooliganism in the country.

Buhari said this during an emergency virtual meeting with the former leaders on Friday, pointing out that the peaceful protests that began in parts of the country later turned violent, causing the death of at least 69 people.

Buhari told them that the deaths included 51 civilians, 11 police officers and seven soldiers. He also said 37 people were injured.

According to him, “A total of nine firearms, including seven AK 47 rifles were carted away during attacks on police stations. Several thousands of inmates were freed during attacks on correctional centres in Edo, Ondo and Lagos states.

“The mayhem has not stopped. Throughout the disturbances, security agencies observed extreme restraint,” he said.

The president said after the initial demand to end SARS was met, the protesters further demanded for an immediate release of all arrested protesters, justice for deceased victims of police brutality and appropriate compensation for their families, as well as setting up an independent body to oversee the investigation and prosecution of all reports of police misconduct within 10 days, among others.

The president said his government would continue to improve good governance through democratic process, including sustained engagement.

“We shall also continue to ensure that liberty and freedom, as well as the fundamental rights of all citizens are protected. Here, I want to also reaffirm our commitment to preserving the unity of this country,” he said.

The President thanked the former Heads of State for attending the meeting and their invaluable comments, observations and advice, adding that ”Nigerians expect nothing less from responsible statesmen.”

All the former leaders commended President Buhari for the steps had taken so far to restore calm and order to the country and also applauded the presidential broadcast of Thursday as detailed and soothing to the country.

Former president, Olusegun Obasanjo said “I commend the speech of last night. The nation had been waiting. You made points that I believe need to be commended. Peaceful demonstration is part of democratic practice. The demands of the genuine protesters were accepted, and you are working on implementation. We commend you.”

Share your thoughts on the story #ENDSARS UNREST: I Won’t Allow Continuous Act of Hooliganism with Nigeria Sketch in the comments section below.