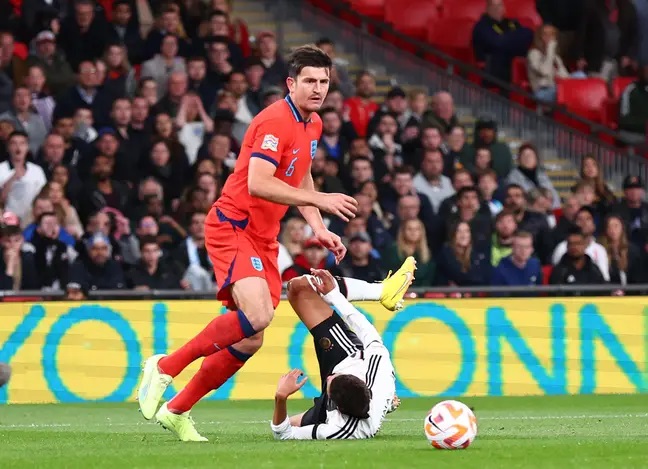 England had a much-improved performance in their final game before they leave for the Qatar World Cup in November, but in the end it wasn’t enough.

England went into Monday night’s game in their worst form since before Southgate took over as manager, with real pressure mounting on him for the first time.

Last week’s loss to Italy had seen them get relegated from the Nations League top group, after failing to win their opening five games.

The match against Germany was to be their last before the World Cup, and they were in need of a huge boost, having only scored once from open play in recent games.

The hosts had slightly the better of the first half, with Luke Shaw’s excellent ball creating the best chance for Raheem Sterling, but the teams went into the break at 0-0.

It was Germany who took the lead in the 52nd minutes after Harry Maguire, selected despite lots of criticism, gave away a penalty with a sloppy challenge on Jamal Musiala.

And the Manchester United captain was criticised again in the 67th minute, when he lost possession high up the pitch, which eventually saw the visitors double their lead, with Chelsea’s Kai Havertz scoring.
England, however, then scored three times in 12 minutes to complete what was an incredible comeback, thanks to Southgate’s substitutions.

Luke Shaw pulled one back for the Euro 2020 finalists, his first international goal since that final 15 months ago against Italy, kicking off a mad spell.

Subs Bukayo Saka and Masoun Mount combined for the second, the Chelsea man scoring the equaliser, after incredible work from the Arsenal winger.

Harry Kane then netted the third from the penalty spot, after Jude Bellingham was fouled on the edge of the box, by Borussia Dortmund teammate Nico Schlotterbeck.

If Southgate and the players, thought they’d finally get their win they were very much mistaken, with Hans Flick’s side still having seven minutes of normal time to get an equaliser of their own.

They only needed four, with Havertz doubling his tally for the night in the 87th minute, but it was all down to a keeping error from Nick Pope.

Serge Gnabry shot from outside the area, and it looked a relatively simple save for the keeper, but the Burnley number one was only able to parry the ball back into Havertz path, with the Chelsea forward tapping in for the equaliser.

The Newcastle United number one was only deputising in goal due to Jordan Pickford’s injury, though it may still inspire some, especially Arsenal fans, to call for Aaron Ramsdale’s inclusion in the starting lineup.

He fumbled Serge Gnabry’s long range shot and spilled the ball into the path of Havertz, who poked home from close range.

Pope’s inability to hold onto the ball was slammed by England fans as they referenced Aaron Ramsdale and Dean Henderson.
They took their frustration out on the Newcastle United goalkeeper on social media.
Pope also started in England’s 1-0 defeat to Italy last week in the absence of Jordan Pickford.