The lingering Academic Staff Union of Universities (ASUU) strike may soon end as the federal government and the university teachers have improved on their stands in a grinding negotiation meeting on Friday.

Significantly, the federal government has shifted grounds on its insistence to include ASUU in the Integrated Personnel Payroll and Information System (IPPIS).

In a bid to resolve the issues as soon as possible, the federal government offered N65billion to settle the payment of earned allowances and revitalisation of the federal universities.

On the contentious Integrated Personnel Payroll and Information System (IPPIS), ASUU informed the meeting that it had carried out a demonstration of the University Transparency and Accountability Solution (UTAS) to all of stakeholders and end users on Thursday, November 5, at the National Universities Commission (NUC), where some stakeholders raised questions that had been addressed. 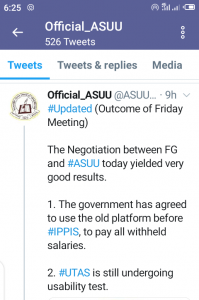 The meeting agreed that going forward, all stakeholders must be carried along in this process to ensure transparency. The Federal Government also agreed to pay ASUU members’ salary arrears from February to June this year using old salary payment platform, the Government Integrated Financial Management Information System (GIFMIS). 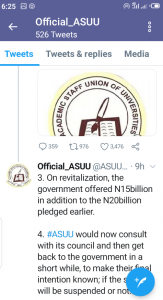 “It was also agreed that the mode of payment applied for the payment of those that had not been captured in the IPPIS platform between the months of February and June this year be adopted for the purpose of payment during this transition period.

“On the demand by ASUU for the payment of check off dues, the Accountant General of the Federation requested that ASUU and other unions should provide his office with the necessary information and dedicated account details in writing to facilitate the deductions and remittance of the check off dues,” according to a communiqué issued at the end of the meeting.

Speaking after the meeting, ASUU President, Prof. Biodun Ogunyemi told journalists that the union had received the new proposals by the federal government and that it will go and consult with its organs before taking a position.

He said, “I don’t really have much to say as the minister had said it all. Government has given us offers and we have promised to go back to our organs to brief them and then come back to government. We acknowledge that progress has been made.”

The two parties agreed to meet again next Friday to continue the dialogue on the premise that the one week should be used to widen further consultations by both government and ASUU.