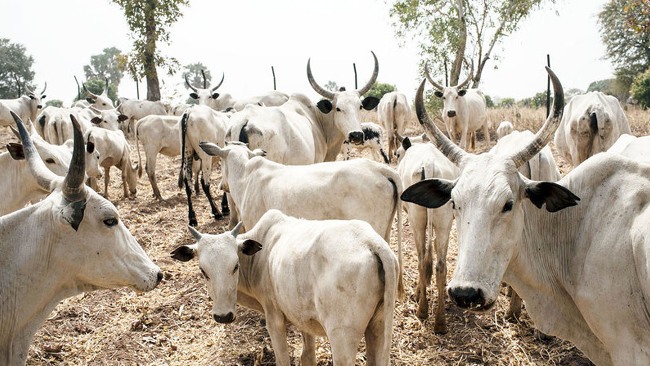 Herdsmen in Nassarawa State have sent out a distress call, saying the Nigerian Army has been carrying out unprovoked aerial attacks on their cows.

The military however refuted the herdsmen’s claims, explaining that they only went after bandits wielding AK-47 in compliance with President Muhammadu Buhari’s directive to shoot at sight anyone carrying unauthorised guns.

Herdsmen’s leaders claimed that two military aircraft killed over 1, 000 cows in multiple attacks on their settlements in Keana and Doma local government areas of Nasarawa State between Thursday, June 10 and Sunday, June 13

They also said a number of cattlemen sustained various degrees of injuries, while over 500 cows that strayed into neighbouring Benue State have gone missing.

There were claims that some bandits shot at a military aircraft, thereby invoking the wrath of the Army, but the cattlemen leaders have vehemently denied this, insisting that the military attack was.unprovoked.

The acting chairman of Miyetti Allah Cattle Breeders Association of Nigeria (MACBAN) in Nasarawa State, Bala Mohammed Dabo, was quoted by Daily Trust to have said “hundreds of cows were also killed between Kwatanbala and Akwanaja in Doma LGA.

“In a separate attack on Thursday in Kuduku of Keana LGA, Alhaji Jigawa lost many cows during the siege. We sat with military officials in Nasarawa State. The commander here represented the overall commander in Benue and he promised that he will escalate the matter to the relevant authorities.

“We pleaded that they should halt the unprovoked siege and killing of cows in Nasarawa State. A governor from neighbouring Benue should stop dictating what is happening in Nasarawa. The Fulani are the most hated people in Nigeria because nobody is speaking for us. We are being killed and maimed and our source of livelihood destroyed without provocation.

“The anti-grazing law in Benue State is just an alibi…It is meant to force the Fulani to extinction. The federal government should rise up to the challenge and salvage our people.”

The daily also quoted the chairman of Coalition of Fulani Youths Groups of Nigeria (CFYGN), Abdulkareem Bayero, to have said “terrible things were happening in Nasarawa State and have not been reported.

“We are calling on the authorities to intervene on the terrorism against the Fulani. There is no anti-grazing law in Nasarawa and therefore no justification for the air force gunships to come and bomb hundreds of cows of innocent Fulani herdsmen.

“The onslaught has been ongoing for long, the latest started on Thursday. Apart from the cows killed in Awe and Keana LGAs, hundreds of others have fled into Benue State and the locals there have rustled them.

“We need the support of the federal government; we want compensation for our people. Peace will continue to elude the country if this kind of lawlessness will continue,” he said.

Spokesman of the Nigerian Air Force (NAF), Air Commodore Edward Gabkwet, said it was not an operation of NAF but explained that no human being or cow was killed by the military in the operation.

He further said bandit activities were spiralling in the Benue State capital, Makurdi, where some bandits wielding AK-47 were mingling with the locals.

Daily Trust quoted him to have said, “the story is totally false. There are some banditry activities not far from Benue State; somewhere very close to Makurdi. It is between Makurdi and Lafia. So, our helicopter went there and tracked some bandits we saw with AK-47.