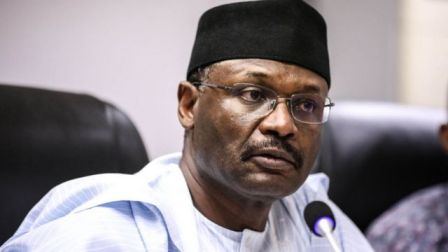 The Independent National Electoral Commission (INEC), on Friday, said the N100 billion provision in its 2022 budget is not enough to conduct the 2023 general elections.

The commission said only the forthcoming Ekiti and Osun states governorship elections will cost N7billion.

The national chairman of INEC, Professor Mahmood Yakubu, made this known when he defended the agency’s 2022 budget estimates before the Joint National Assembly Committee on INEC and Electoral Matters in Abuja.

He said that the N100 billion represents the first tranche of funds for the general elections and that the agency expects additional funding in the 2023 budget.

“Either we come to the National Assembly to defend the budget before the committee or we would do what we did in 2019 when the executive just submitted the proposal to the National Assembly and we came to defend it. We would need more money because we’ve expanded our polling units and we are introducing new technology for elections among many other new innovations. The number of registered voters will increase beyond the 84 million for the 2019 general elections.

“Some of the things we needed would require four months, some five months while some would require seven months. We will start early preparations now that we have the money early enough and we will just procure sensitive materials for the election. We hired 34, 000 vehicles for the 2019 elections so we have plans to also outsource the material distribution in 2023 because we cannot afford the cost of buying such huge number of vehicles and engage the drivers that would drive them.

On the breakdown of INEC’s N40 billion budget proposal for 2022, Yakubu said:

“Electoral operational and administrative cost is N23.3bn, Election technology cost is N61.1bn, Electoral capital cost is N15.4bn. Electoral operational and recurrent cost (conduct of polls) is N7.3bn for the procurement of non-sensitive materials and logistics. We also budgeted N7bn for the conduct of Ekiti and Osun governorship election including the possibility of runoffs. We made a provision of N2.6bn for Ekiti State with a population of over one million registered voters and N4.4bn for Osun with 30 local government areas. We are earmarking N4.2bn for the continuous registration exercise in 2,700 centres.”

He said the Commission will expend the sum of N169 million for monitoring of party congresses and campaign activities.

“I am not sure it would be adequate. We are monitoring party congresses and primaries right from the ward levels by direct means. We have 8,809 wards and 18 political parties. We have types of elections. Presidential, senatorial, House of Representatives, and States constituency primaries. If they would be done by direct means, we have to make preparations for it. We have 993 state constituencies, so, if parties are going to nominate their candidates we are going to monitor in all the locations – 109 senatorial districts, 360 House of Representatives and 28 governorship elections because eight are being conducted off season. We will monitor party primaries for the nomination of candidates in over 1,400 constituencies so the cost would be enormous.”

The Commission, according to him has earmarked the sum of N2 billion for litigation and prosecution.

“This has become a real burden on the commission. In the last 27 elections we have conducted, none has been successfully litigated in court including Edo and Ondo. There are more litigations arising from the conduct of party primaries,” he said. He added that voter education and enlightenment around new polling units recently created and its new innovations would cost N1billion.