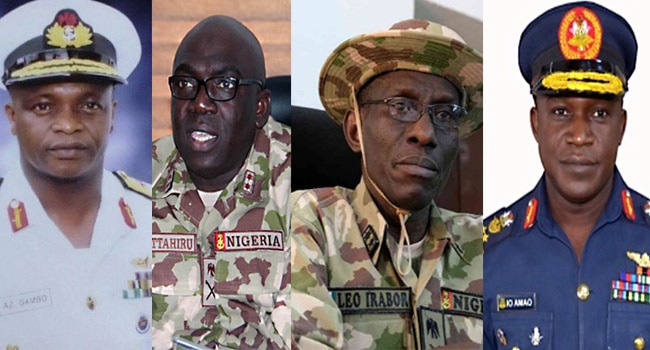 Nigeria’s Chief of Defence Staff, General Lucky Irabor, has ruled out the possibility of negotiating Nigeria’s peace and security with terrorists.

According to him, it is rather the armed forces that will determine the way peace and security are preserved in the country.

He said this on Friday after President Muhammadu decorated the country’s new service chiefs and gave them instructions to secure the nation from terrorists and bandits within weeks.

Asked about the role the Nigerian military played in the recent negotiations that led to the release of the school children from their abductors, General Irabor said: “Peace and security is not just the security of the borders alone. It comes with having to build bridges across various divides.

He assured Nigerians that the country would soon start experiencing peace, saying that Nigerians cannot continue to live in fear.

Asked the next step for the military, he said: “Nigerians expect us to bring about peace and security in concert with other security agencies. That we will do. We can’t live in fear. And we will ensure that whatever brings fear to Nigerians before now will be a thing of the past.”

He added: “Strategies are not sacrosanct. Of course, there are dynamics that we need to begin to look at, what needs to be reviewed, and that is precisely what we are doing currently. And we review various strategies and of course come up with new ones to be able to meet the demands of the current realities.”

On the expectation for the military to achieve concrete results in the next few weeks, the CDS said: “That is a matching order that Mr. President has given to us, and we will work assiduously to achieve that,” adding, “No doubt, the next 100 days are not as important as today.

“I believe that as members of the Armed Forces, working in concert with the rest of the security agencies, we will bring Mr. President’s expectations to bear in terms of our task. But let me also let you know that the inevitable is that Nigerians will indeed experience peace and security across the land.”

President Buhari had earlier asked them to secure the country as early as possible, preferably before the rainy season sets in, urging them to seek out the best officers and men within the forces “irrespective of seniority and paper qualifications, and work with them to secure this country.”

Buhari asked them to “go out into the field and secure the country.”

He said: “You have got a few weeks to do that because by the rainy season, we expect people to develop confidence and go back to the land so that we don’t get into trouble by being away from the field and therefore unable to produce enough food for the nation.”

At the decoration ceremony on Friday, Lucky Irabor, the Chief of Defence Staff, was promoted from Major-General to General, while the Chief of Army Staff, Ibrahim Attahiru, is now a Lieutenant-General. He was until now a Major-General.

The Chief of Naval Staff Awwal Zubairu was elevated from Rear Admiral to Vice Admiral while the Chief of Air Staff, Isiaka Oladayo Amao, moved from Air Vice-Marshal to Air Marshal.