Governments of states where COVID-19 palliative materials were discovered and raided by their populace have been trying to explain away the hoarding of such items in warehouses all the while.

Nigerian Sketch reports that Cross River, Edo, Ekiti, Kwara, Kaduna, Lagos, Osun, Plateau and Taraba states in Nigeria witnessed mass invasion of government warehouses where palliatives that were supposed to have been distributed to the poorest and most vulnerable people during the COVID-19 lockdown period were kept.

Acting governor, Hadiza Balarabe, said in a state-wide broadcast that “the government was ready to commence distribution in all the local government areas, after taking pains to arrange a fair and efficient system.”

According to her, arrangements for distributing the items at ward level had been concluded, when the looters stole the items.

It has however been observed that the said materials have been in the custody of the state government since the COVID-19 lockdown period which was eased nationwide about three months ago. 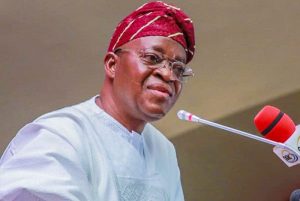 Earlier on Friday, the Osun State Food and Relief Committee on COVID-19 gave similar unconvincing reasons why the relief items were not distributed to the citizens, saying the looted items at a warehouse in Ede town were not hoarded, but rather kept for flag-off of official distribution.

Bayo Jimoh, secretary to the committee, in a statement in Osogbo, said that the looted items were donated to the committee as palliatives to the people by Private Sector Coalition Against COVID-19 (CACOVID).

Items such as beans, noodles, sugar, salt, garri, rice, pastas, vegetable oil, among others, were looted from the warehouse located within the moribund Cocoa Industry, Ede.

“We do not have the authority to distribute the food items without approval from Abuja.

“Besides, the Committee is still expecting the rice component of the donated items, which is 40, 230 bags of 5kg.

“All these are part of the reasons the items were still in the warehouse up till the time of the invasion.