The student of Federal University, Dutse, Aminu Adamu, who was arrested for criticising the wife of Nigeria’s president, Aisha Buhari, on Twitter, has been ordered to be remanded at Suleja Prison in faraway Niger State.

He illustrated his comment with an image of Mrs Buhari that showed her to be really fatter than she had been known all along.

Security operatives, however, recently traced and arrested him in Dutse and took him all the way to the Presidential Villa in Abuja, where he was allegedly beaten and tortured by Mrs Buhari and others, according to his uncle.

The student was subsequently arraigned at the FCT High Court No. 14 in Abuja on Tuesday for cyber-stalking and defamation against the president’s wife, where he was denied bail despite pleading not guilty to the charges filed against him. 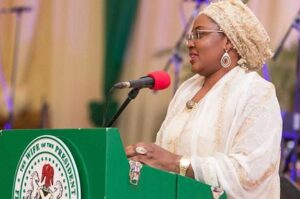 A Kano-based lawyer who does not want his name in print told Nigerian Sketch on Thursday that “the boy was entitled to bail because the matter was ordinarily bailable and he was innocent.

“The presumption of innocence is in his favour, and the court ought to have released him on bail even without his lawyer asking for it. I think some of our courts and judges are seriously lacking in the understanding of fundamental rights and constitutional safeguards. It is a pity that the court could not give simple constitutional protection to an innocent Nigerian because another fellow Nigerian who is in position of power wanted him humiliated. This wouldn’t have happened if our judges understand the basic role of the law.”

Aminu’s lawyer, CK Agu, spoke with BBC Hausa, saying “Even in the court session yesterday, we notified the judge about the efforts made to have him released on bail, but we did not receive any reply from the police. We applied to the court to release the student on bail on health grounds and the fact that he will sit for the exam on 5, December. The court has ordered the police to provide the bail application before it for consideration between Tuesday and Wednesday,” Mr Agu was quoted to have said.

Aminu, who hails from Azare in Bauchi state, is a final-year student of the Department of Environmental Management at Federal University, Dutse.

His arrest had sparked outrage, especially on social media, where many Nigerians said no one should be arrested for airing their views.

Aminu’s parents have tendered apology to Mrs Buhari on his behalf but is yet to comment on the development.