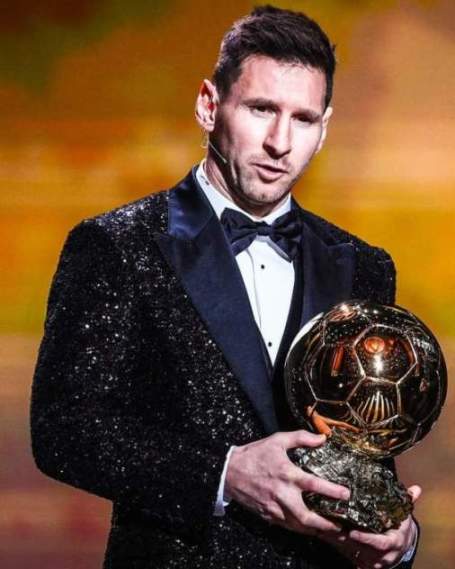 Lionel Messi admits Robert Lewandowski was robbed of a Ballon d’Or win and urged France Football to give him his prize for last year.

Messi was crowned as the 2021 winner at a ceremony in Paris, winning the coveted award for an unprecedented seventh time.

The 34-year-old was the favourite going into the event after leading Argentina to a first international trophy since 1993 in the summer when they went all way in the the Copa America.

Lewandowski finished second and was named ‘Striker of the Year’.

Messi made sure to shout him out in his acceptance speech. In fact, the Paris Saint-Germain went as far as saying the Polish striker deserved to receive the 2020 award that was scrapped due to COVID-19.

He looked in pole position to win the award for the first time after hitting 55 goals as Bayern Munich won a treble, but had to settle for FIFA’s Best Men’s Player award.

“I’d like to mention Robert, it’s been a real honour to compete with him,” Messi said on stage.

“I think France Football should award you your 2020 Ballon d’Or, you deserved it.”

Messi scored 41 goals and registered 17 assists in 56 appearances in all competitions for club and country and led Argentina to a long-awaited Copa America win in the summer.

After losing seven finals with the national team, Messi collected both the Golden Ball and Golden Boot awards as La Albiceleste beat Brazil to win their first trophy since 1993.

It was Messi’s first international trophy and his stellar tournament helped propel him to yet another individual prize.

Messi, who has four goals in nine games for new club Paris Saint-Germain, collected his latest Ballon d’Or at a ceremony hosted by Chelsea legend Didier Drogba at the Theatre du Chatelet in the French capital.

Introduced by journalist Gabriel Hanot in 1956, the Ballon d’Or has been handed out yearly to the world’s best player – with journalists, coaches and captains of national teams all having a say in proceedings.

Messi was presented the award by his former Barca teammate and close friend Luis Suarez and the Eiffel Tower was lit up for him to celebrate his triumph.