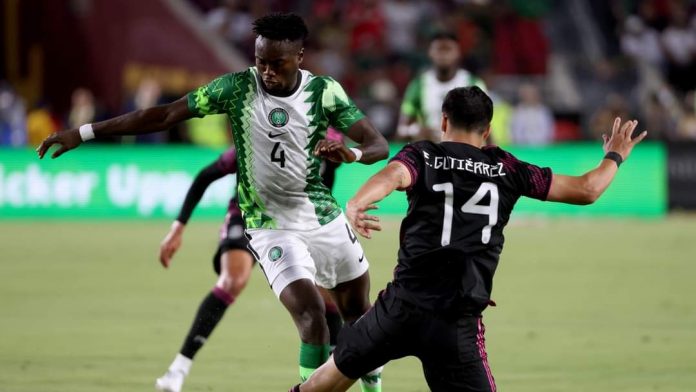 Nigeria’s Super Eagles were thrashed 4-0 by Mexico in Los Angeles, USA in an international friendly played in the early hours of Sunday.

Mexico bossed the early exchange and went 1-0 up in the 2nd minute through skipper Herrera, who slammed home a corner after he was left unmarked at the far post.

Just two minutes later Mexico doubled their lead as Funes Mori finished off a cross from the right with his left foot.

Mexico continued to control the match and almost extended their lead on 25 minutes but Jesus Tecatito’s effort missed the target.

In the 29th minute it was the turn of Hirving Lozano to try his luck but Stanley Nwabali got down well and parried for a corner.

Mori almost got his second goal on 38 minutes but sent his left-footed volley just over the bar.

The Mexicans resumed their dominance of the game and had a chance to go 3-0 up following a dangerous shot by Lozano which Nwabali punched away for a corner.

But in the 51st minute Mexico went 3-0 up thanks to Herrera who grabbed his second of the game.

In the 57th minute the Eagles made a double change with Stephen Jude and Sunday Adetunji replacing Adekunle Adeleke and Charles Atshimene.

The Eagles went close to getting on the score sheet but Alfredo Tala made a good save.

And in the 77th minute Mexico got their fourth goal through Dos Santos who finished with a superb strike after Erick Gutierrez sent a pass behind the Eagles’ defence.

Share your thoughts on the story Mexico Humiliate Super Eagles 4-0 in USA with Nigerian Sketch in the comments section below.