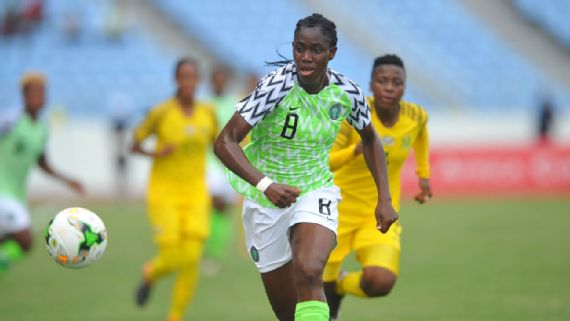 The two nations met in the 2018 Cup of Nations final, where the Nigerians defeated Banyana on penalties after it ended goalless after extra-time.

After a relatively quiet start, the Super Falcons carved out the first chance on 24 minutes when Antionette Payne played in Asisat Oshoala, but Mbane popped up with a vital block in the box.

Despite the couple sights at goal for the Nigerians, none of those efforts found the target while Desiree Ellis’ troops failed to trouble Tochukwu Oluehi in the opening 45 minutes.

That nearly changed four minutes after the break when Oshoala was given space in the box to unleash a vollley, which goalkeeper Amanda Dlamini was able to save. 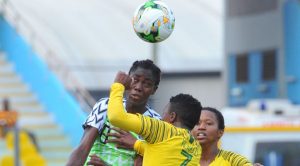 The opening goal eventually arrived on the hour mark as Cesane did well to beat her marker before picking out Seoposenwe, who took one touch before slotting home.

The lead was doubled a couple minutes later as Kgatlana turned provider to play in Hildah Magaia who sent a first-time finish into the far corner.

Rasheedat Ajibade reduced the deficit for the Nigerians in added time with a close-range strike into the bottom corner, but it proved to be a consolation as Banyana secured maximum points.

Share your thoughts on the story MOROCCO 2022: Bayana Bayana defeat Super Falcons in WAFCON 2022 group opener with Nigerian Sketch in the comments section.