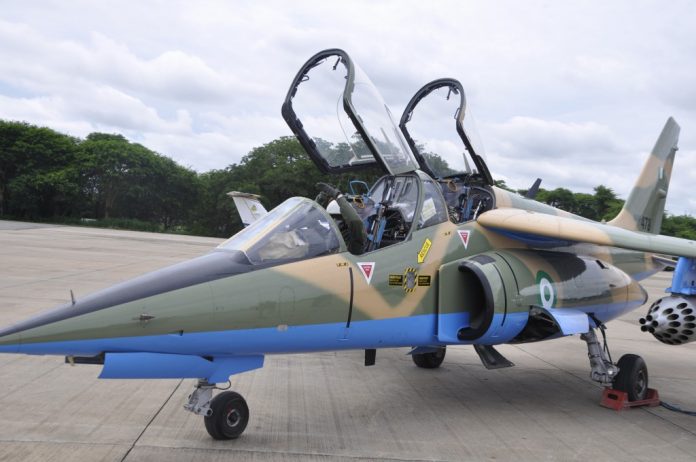 The Nigerian Air Force (NAF) said on Sunday it dispatched three aircraft which included Alpha-Jets, L-39 and MI-35 to stop the Islamic State for West Africa Province (ISWAP) terrorists from carrying out their deadly operation in Borno State.

NAF said it was a joint operations between the ground and the air troops in which an undisclosed number of ISWAP terrorists were killed.

The spokesman of NAF, Air Commodore Edward Gabkwet, was reported by Daily Trust to have said the terrorists were heading towards Mainok, a community in Borno town, to wreak havoc before troops of Nigerian Army and Air Force jointly intercepted them.

According to him, three aircraft – Alpha-Jets, L-39 and MI-35, were dispatched immediately the military received an intelligence that the terrorists were on their way to Mainok to kill and maim.

He was quoted to have said, “We had an intelligence from our platform that about eight trucks were heading towards Mainok and of course, immediately, about three aircraft were dispatched which included Alpha-Jets, L-39 and MI-35. Luckily for us, they were able to take six out of those eight gun trucks.

“We are not aware of who and who, which terrorists were in that convoy of those trucks but what we know is that, six of those gun trucks were successfully hit and it was a very successful operation. As at the last count, the Nigerian Army troops were in that area trying to mop up the exercise and our aircraft are supporting them.

“So, it was a successful joint operation, and it goes to show that as long as we maintain synergy and jointness (sic), the situation we are in this country whether it is in Northeast or Northwest, it is something that is surmountable. We have seen it and what the Chief of Defence Staff has been talking about on jointness.”

He added that the military is not any way taking lightly, the order given by President Muhammadu Buhari that the terrorists should not be given breathing space.

The daily reported that when asked the exact number of terrorists killed in the operation, Gabkwet said, ”Like I have told you, I don’t want to speculate and start giving you numbers, but I know that if you hit 6 gun trucks out of eight, you can assume and estimate how many terrorists that were killed. This means that we are on top of the situation and obviously the future is very bright for us.”

Share your thoughts on the story NAF Deploy Alpha-Jets, L-39, MI-35 to Neutralise ISWAP Terrorists in Borno with Nigerian Sketch in the comments section below.