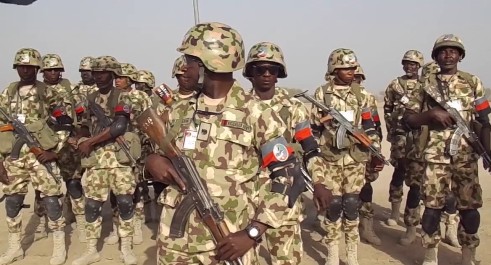 The Nigerian Army and other intelligence outfits have begun what insiders called tactical preparations to face terrorist groups in Nigeria headlong.

This move, Nigerian Sketch was told, was as a result of the recent plans by terrorist groups to join forces in wrecking havoc on the country.

Factional terrorist groups of Boko Haram and the Islamic State of West Africa Province (ISWAP) have purportedly reunited after a long-standing acrimony that resulted in the death of erstwhile leader of the earlier, Abubakar Shekau.

The two groups indicated that they have resolved to form a common front through which they will face the Nigerian security outfits which has notably been gaining some appreciable victory over terrorists of recent.

The claim of reunion was contained in a viral video seen by Nigerian Sketch Saturday night which showed Boko Haram and ISWAP commanders holding hands in a gesture of unity and allegiance.

Both groups pledged their allegiance to one Aba Ibrahim Al-Hashimiyil AlKhuraishi, whom they unanimously described as ‘Khalifan Muslimai’, meaning “The Leader of Muslims”.

In the video, which lasted for about 13 minutes, one of the speakers said Nigerian intelligence services created divisions that broke the camps, but insisted that fences have now been mended and struggle must resume until success is achieved.

In a statement by the Director Army Public Relations, Brig. Gen. Onyema Nwachukwu, the COAS further commended the troops on the wealth of battle experiences acquired through successful operations conducted within Sector 2 Area of Responsibility including, Operation Ayiso Tamunoma, Katana Jimlan, Fire Ball and Operation Tura Takaibango among others.

General Yahaya enjoined the troops to use the lessons learnt from the series of operations to destroy the remnants of the marauding terrorists within their area of responsibility.

Share your thoughts on the story Army Braces for Tougher Challenge as Boko Haram, ISWAP Reunite with Nigerian Sketch in the comments section below.