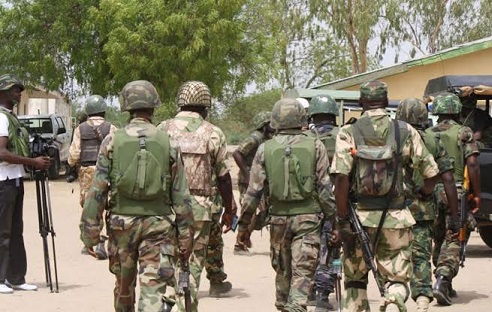 The Nigerian Army on Sunday claimed to have neutralised Boko Haram and Islamic State West Africa Province (ISWAP) terrorists who had tried to infiltrate the Biu in Borno State.

Nwachukwu said the criminal elements met their Waterloo when the troops of 231 Battalion and 331 Artillery Regiment swiftly routed them in a failed incursion at Maina Hari Village in Biu on Saturday, January 15, 2022.

“In the intense battle, troops unleashed superior fire power on the terrorists, neutralising five BH/ISWAP terrorists, compelling others to withdraw in disarray.

“The gallant troops also captured from the terrorists one gun truck, one Deshka M Anti-Aircraft Gun, one HK 21 Machine Gun, one Rocket Propelled Grenade Bomb, 137 rounds of 12.7mm Anti-Aircraft Rounds amongst others. Troops are currently in pursuit of the fleeing terrorists,” the statement said.

A recent similar claim by the Army was challenged by a cleric, Ahmad Abubakar Gumi, who asked the them to provide evidence they killed the terrorists they claimed to have killed. (Read Gumi’s challenge here)

Share your thoughts on the story Nigerian Army says it neutralised terrorists, recover anti-aircraft gun in Borno with NigerianSketch in the comments section.