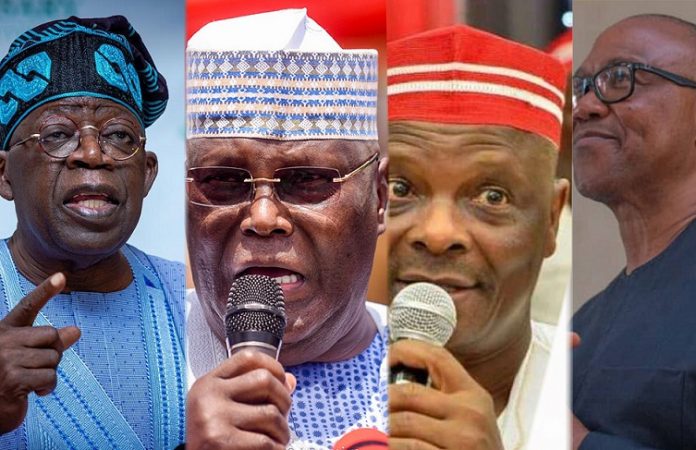 An opinion poll conducted by NOI Polls has tipped the Labour Party (LP) candidate, Peter Obi, to win the 2023 the presidential election in Nigeria, and this result has irked other presidential candidates.

The opinion poll released by NOI Polls, an opinion polling centre with a database of over 70 million phone numbers, favoured Obi to win the 2023 presidential election.

The poll commissioned by ANAP Foundation, which was conducted this month suggests a three-horse presidential race between Obi, Tinubu and Atiku.

Kwankwaso of the NNPP who came fourth in the poll was described as a ‘dark horse.’

The Labour Party candidate led the pack in virtually all the age categories.

About 33 per cent of the respondents were undecided, while another 15 per cent refused to disclose who they would vote for, giving Obi the lead.

The statement announcing the result of the opinion poll stated: “Mr Peter Obi’s 8 percentage point lead at this early stage is significant, but not sufficient to separate him completely from a leading pack of candidates scoring 21 per cent, 13 per cent and 13 per cent respectively,” ANAP said in its statement.

“Undecided voters and those who prefer not to reveal their preferred candidate add up to a whopping 32 percent and 15 per cent respectively. The gender split of undecided voters shows that 39 per cent of women are undecided versus 27 percent of male voters.”

The lowest registered voter percentages were in the South East with 88 per cent and the South-west with 85 per cent.

The researchers listed the top five reasons why voters are more inclined to vote in the forthcoming elections to include “the need to tackle insecurity (45 per cent), the economy (20 percent), education (9 per cent), unemployment (7 per cent) and poverty alleviation (4 percent).

“Similarly, 46 per cent of the respondents would love to see their preferred presidential candidates participate in a televised interview and/or debate, with the interview/debates spanning across topics like their party manifestos, issues of security, economy, education, job creation, healthcare and agriculture amongst others.

The age groups that expressed the greatest willingness to vote were those between 46-60 and 61+ years.

“On average, the poll shows that almost 8 in 10 registered voters are certain that they would be voting in the next presidential election. If they stay committed then we could witness a huge turnout in the February 2023 elections,” it added.

But, while the results showed some significant trends, the poll said it is key to note that the battle ahead lies in the hands of the swing voters, as it appears they would ultimately decide which candidate takes the lead to emerge as Nigeria’s next president of in the 2023 presidential elections.

“In summary, our September 2022 Polls are inconclusive in terms of establishing a clear winner, as the undecided voters are large enough to turn the tables. However, ANAP Foundation has concluded that the trends are clear enough to establish the front runners and so our subsequent polls will concentrate on the 4 leading candidates only,” the foundation concluded.

But other leading presidential candidates faulted the poll, stating that it was manipulated.

Presidential candidate of the APC, Bola Ahmed Tinubu, picked holes in the poll, saying it is a dubious concoction.

Tinubu who spoke through the APC Presidential Campaign Council (PCC) said he and the governing party are not in any way perturbed by what he described as dubious opinion polls.

“We are unperturbed by these dubious and unreliable statistics because our research shows that NOI Polls have been off the mark at critical election periods in recent times,” a statement signed by director, Media and Publicity, of the APC campaign council, Bayo Onanuga, noted.

Onanuga said the NOI polls made “wild and incredible permutations on the presidential elections”.

Faulting the polls, Onanuga said, “For example, preparatory to the March 2015 presidential elections, NOI published in October 2014 the results of a ‘Viability Poll’ which used the concepts of Familiarity and Net Favourability Position to survey. In the results, NOI claimed that President Goodluck Jonathan has the best overall familiarity rating at 99% and Net Favourability Probability of ±25.

“By contrast, NOI dismissed the then All Progressives Congress candidate, Muhammadu Buhari as a ‘borderline candidate’ who needed ‘huge public relations’ to shore up his performance.

“But when the Nigerian people went to the polls, who won? The APC candidate and now President, Muhammadu Buhari.

“This is not the only instance when the NOI has turned its political bias in an election period to fraudulent statistics.”

On his part, PDP presidential candidate, Atiku Abubakar, said the poll was manipulated, adding that polls that attract credibility are released with the sample size and the margin of error.

“You have to look at the demographic and the place where the sampling was carried out. It was carried out online and 57.5 percent of Peter Obi supporters who followed him on Twitter are not living in Nigeria. The polling is a true reflection of that.”

Bwala who made Atiku’s position while discussing on Channels TV political programme, Politics Today, further said, “For a candidate to become a president, he must win the majority and get 25 percent. Where Labour Party and the NNPP are seeking to make inroads, PDP is there already”.

Also, the spokesman of the NNPP presidential candidate, Abdulmumini Jibrin, knocked the organisers of the opinion poll, saying the only place Obi will have some significant votes is the South East.

“The only place Obi will demystify the structure is in the South East. They will have a little but they can’t win the national election,” Jibrin said.