Ochonu Explains Why #EndSARS Protests Have Lasted This Far

Nigerians, especially those sympathetic to the government of the day, have been raising questions over the sustenance of the persistent protests against police brutality and insecurity across Nigeria.

The protests, which have lasted more than two weeks without relenting, have not shown any sign of withering, and some pro-government Nigerians have began to raise questions over the likelihood of faceless sponsors behind the agitations.

Noone has been directly named, but there are insinuations that the sort of organistion, entertainment, chains of food supply and lavatory arrangements that have characterized the protests, especially in Lagos, were bankrolled by some politicians. 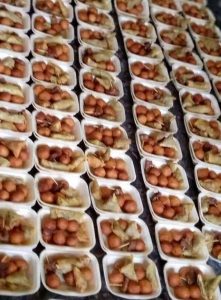 But, while the allegations have remained mostly muted and unofficial, a Nigerian-born Professor of History at the Cornelius Vanderbilt University, Moses Ochonu, has explained that protesters have only succeeded in confounding the interventionist modalities of the government, and that was why the protests have lasted so long without cracking.

The professor, who specialises in the modern history of Africa, with a particular focus on the colonial and postcolonial periods, wrote on his Facebook page on Monday:

The #endsars youth protesters have confounded the interventionist modalities of the government. This is why they have sustained their struggle for this long unlike past protests which fizzled out quickly.

We’re all learning from the tactical and strategic genius of this generation.

Share your thoughts on the story Ochonu Explains Why #EndSARS Protests Have Lasted This Far with Nigerian Sketch in the comments section below.