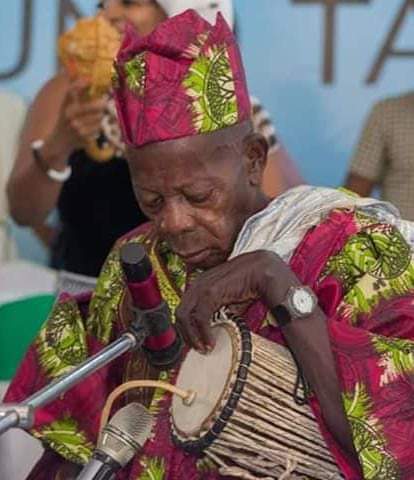 ADEWOLE ONILUOLA: Farewell to a Gnome of Talking Drum

His exit marked the end of an era in traditional drumming. Arguably, he was one of the pioneers of Apala drumming. The history of Apala is incomplete without referencing the lead drummer of Ayinla Omowura, Late Alhaji Ramoni Adewole Alao (Oniluola).

Truly, drumming was the vocation of his root in Idere, Ibarapa Central Local Government of Oyo State, but Adewole carved a niche for himself through his dexterity. He was a core professional.

Talking drum is one of the tools of traditional communication. It can be used to warn, praise, announce, celebrate and so on.

One cannot but agree that Baba Adewole’s ability to communicate with his drumming was fantastic. This immensely contributed to the synergy between the vocals of the late Apala music legend, Alhaji Ayinla Omowura and the late drummer. Whether on stage or in the recording studio, the duo played their roles interchangeably and the effective communication between the percussion and the vocals became glaring. 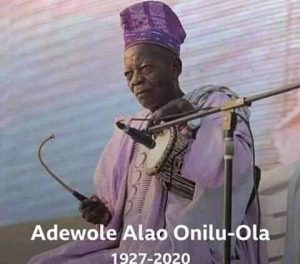 My first meeting with Baba Adewole was on May 24, 2019, when Dr. Festus Adedayo and I paid him a courtesy visit at his Keeshi, Abeokuta residence as part of our research engagements for Omowura’s biography.

After exchanging pleasantries with him, he made a prophetic statement: “Eyin okunrin yii e so pe e n bo lati ojo yii, ti mo ba ti ku nko? (roughly translated to mean: You said you were coming to see me all this while. I could have died before you come).

The lesson therein is that procrastination could be dangerous; time is of the essence. Well, that statement wasn’t unexpected from a man who was lucky to have attained 96 years then.

The visit will forever linger in my memory as I was able to get the correct interpretation of some drumbeats in some Omowura’s albums from the source. As a matter of fact, God really blessed Baba Adewole with a unique retentive memory. Till his last day, he never suffered memory loss. There were consistent consistencies in all the interviews he granted- both in print and broadcast.

One fascinating occurrence that gladdens my heart was how my Club, Ayinla Omowura Music Lovers International of which I am one the arrowheads organised a birthday bash for Baba Adewole on November 28, 2020. He transited exactly a month after the elaborate event. This is the solace for us that we celebrated him while alive.

Every week on our WhatsApp platform, we review Omowura’s records. The experts in the house would interpret the drumbeat, followed by the analysis of the songs. It was my turn to review and I was reviewing vol.1, ‘Ogun Ajobo’ when around 11pm, one of Baba’s children, Alhaji Kamil Adewole who is one us broke the sad news. He announced the exit of the legendary drummer. Everything came to a halt immediately! Activities were suspended as a mark of honour to the rare gem.

Some of his evergreen drumbeats include:

Akanni, a pronounced follower of the life and works of Apala music legend, late Ayinla Omowura, wrote this piece as a tribute to Omowura’s lead drummer, Adewole Aalo, who died recently.

Share your thoughts on the piece ADEWOLE ONILUOLA: Farewell to a Gnome of Talking Drum with Nigerian Sketch in the comments section below