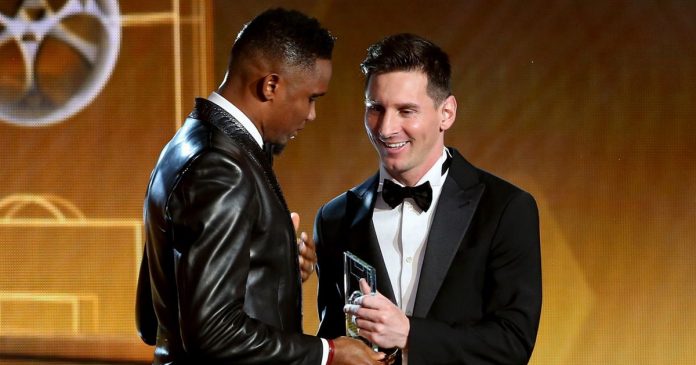 The former Barcelona forward, Sameul Eto’o has insisted that his ex teammate is the greatest footballer of all time, saying, “I believe he is the greatest of this life and also of the other life.

“When he is playing, you really have the impression that he’s playing a pickup game with his friends.”

Eto’o had an incredible career and worked with lots of modern greats from Lionel Messi to Ronaldinho on the pitch and Jose Mourinho to Pep Guardiola off it.

He was a Barcelona star when Messi first broke into the first team at the Nou Camp and scored his goal, and now the club’s all time top scorer has broken Pele’s long standing record of most goals scored for a single club of 643.

Speaking about special moments playing alongside the six time Ballon d’Or winner, Eto’o recalled playing against Juventus in 2005, just as the Argentinian was really making a name for himself, “I can remember specifically a game playing for the Joan Gamper Trophy against Juventus, in 2005.

“Patrick Vieira was on the other team, and he is one of my big brothers, he was at the top level of the time, playing for a top club. I told him ‘Big Brother, be on the lookout, you’re going to see a future great, he is going to be future number one, his name is Leo Messi.’

“Vieira said ‘Don’t worry I’ll get it fixed, I’ll take care of him,’ and then at the end of the game he came up to me and said ‘That’s amazing, it’s absolutely impossible,’ and I told him ‘You saw the future number one, he is the one.'”

Eto’o won the Treble with Messi and Barca in 2008/09 before moving onto Inter and repeating the trick with Inter under Mourinho.

The 39-year-old explained why he prefered Mourinho and working with the Spurs boss than with Pep Guadiola.

“It’s a question of style, they each have their own style, I prefer Jose Mourinho.

“I am more friends with Jose Mourinho’s style but Pep is a top top coach, so I don’t think you can make a decision.

“But I can tell you this there is no other coach, no other manager, who will get to motivate his players as much Jose Mourinho does. Now there are more coaches, more managers, each with their own style but in terms of motivating and getting the most out of their players that is Jose Mourinho. For me the treble with Jose is the special one.”

He said he hopes Messi will stay at Barcelona but he accepts that the forward may leave next summer and thinks that Ansu Fati is the man to take over from him, saying, “I think he is the one for the future, that said he’s presently doing amazing stuff so I think the club really needs to groom him and take very good care of him.

“Let’s hope he’s the one to take over from Messi.”