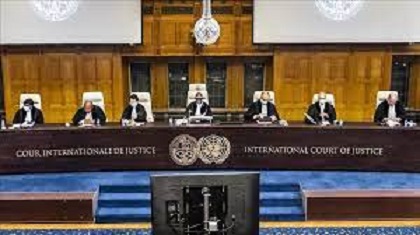 The Kingdom of Sweden, invoking Article 63 of the Statute of the International Court of Justice (ICJ) has filed in the registry of the court a declaration of intervention in the case concerning Allegations of Genocide under the Convention on the Prevention and Punishment of the Crime of Genocide (Ukraine v. Russian Federation).

The release said pursuant to Article 63 of the Statute, whenever the construction of a convention to which States other than those concerned in the case are parties is in question, each of these States has the right to intervene in the proceedings. In this case, the construction given by the judgment of the Court will be equally binding upon them.

To avail itself of the right of intervention conferred by Article 63 of the Statute, Sweden relies on its status as a party to the Convention on the Prevention and Punishment of the Crime of Genocide (the “Genocide Convention”).

In its declaration of intervention, Sweden emphasizes that “the prohibition of genocide is a jus cogens norm in international law, and the rights and obligations enshrined in the Convention are owed to the international community as a whole”, and adds that it has “a direct and undisputed interest in the construction that might be placed upon the [Genocide] Convention by the Court in its decision in these [p]roceedings”.

In accordance with Article 83 of the Rules of Court, Ukraine and the Russian Federation have been invited to furnish written observations on Sweden’s declaration of intervention.

Recall that on 26 February 2022, Ukraine filed an application instituting proceedings against the Russian Federation before the International Court of Justice (ICJ), the principal judicial organ of the United Nations, concerning “a dispute . . . relating to the interpretation, application and fulfilment of the 1948 Convention on the Prevention and Punishment of the Crime of Genocide” (the “Genocide Convention”).

In its application, Ukraine contends, inter alia, that “the Russian Federation has falsely claimed that acts of genocide have occurred in the Luhansk and Donetsk oblasts of Ukraine, and on that basis recognized the so-called ‘Donetsk People’s Republic’ and ‘Luhansk People’s Republic’, and then declared and implemented a ‘special military operation’ against Ukraine”.

Ukraine “emphatically denies” that such genocide has occurred and states that it submitted the Application “to establish that Russia has no lawful basis to take action in and against Ukraine for the purpose of preventing and punishing any purported genocide”.

In the Application, Ukraine also accuses the Russian Federation of “planning acts of genocide in Ukraine” and contends that Russia “is intentionally killing and inflicting serious injury on members of the Ukrainian nationality  the actus reus of genocide under Article II of the [Genocide] Convention”.

The Applicant seeks to found the Court’s jurisdiction on Article 36, paragraph 1, of the Statute of the Court and on Article IX of the Genocide Convention, to which both States are parties.

Together with the Application, Ukraine filed a Request for the indication of provisional measures, pursuant to Article 41 of the Statute of the Court and Articles 73, 74 and 75 of the Rules of Court, in which it requests the Court to indicate provisional measures “in order to prevent irreparable prejudice to the rights of Ukraine and its people and to avoid aggravating or extending the dispute between the parties under the Genocide Convention”.

Pursuant to Article 74 of the Rules of Court, “[a] request for the indication of provisional measures shall have priority over all other cases”.

Share your thoughts on the story Sweden files intervention declaration in Ukraine v. Russian genocide case at ICJ with Nigerian Sketch in the comments section