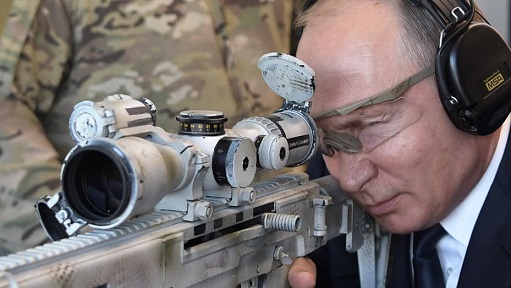 The West and Crazy Crush to Crush Russia

Since 24 February 2022, when Russia began a military operation in Ukraine, in a major escalation of the Russo-Ukrainian conflict that began in 2014, everything in the world, including the issue of the Covid-19, has shifted to that region, as the West is compelled to stay permanently awake, for fear of the unexpected.

Observers believe it is the largest military attack in Europe since World War II. But if Putin has the passion to invade Ukraine, it is an open secret that the West also has a crazy crush to crush Russia. This interest and counter interest would remain the dominant interest of the world for long.

As the conflict approaches the third week, and the Russian troops close in on the Ukrainian capital, Kyiv, with a mass exodus of refugees, concerns are high on how best to put pressure on Putin to pull back. The worry of the West is, where next for Putin after Ukraine.

While President Putin is insisting that Russia cannot feel safe, develop and exist because of what he claimed to be the constant threat from modern Ukraine, the misgiving of the West, particularly America, is that Putin has shattered peace in Europe and thrown the continent’s entire security structure into jeopardy.

But Putin has an opposite believe, saying the threat is rather from Ukraine, which has not swayed to the right, but turned to the West, with clear signal that it wants to join the European Union and the Western defensive alliance, NATO. And Russia wants to reverse that.

Putin said his goal is to protect people subjected to bullying and genocide, and aims for the “demilitarisation and de-Nazification” of Ukraine. But the West believes otherwise, hence the crazy crush to crush Russia.

As things stand today, Russian troops have taken control of most of the major cities in Ukraine and virtually encircled the capital, Kyiv. It is very clear that Vladimir Putin seeks to take control of Ukraine and overthrow the government of President Zelensky, who said he had been warned, “the enemy has designated him as target number one and his family is target number two”.

To achieve that, the West has put sanctions on Putin, aimed at ruining the Russian economy and hopefully fuel social unease and political instability in the country, with the ultimate goal of changing the course of Russian politics, or the government itself, or even replacing President Putin. Such is the crazy crush to crush Russia.

However, almost a month into the sanctions, it’s becoming apparent that the sanctions have had the opposite effect. President Putin’s popularity has not fallen as expected in Russia, while public approval of the government and parliament are rising. The sanctions have brought the nation together and have failed to succeed in tearing the relationship between China and Russia.

While the West wants China to give support in the enforcement of the sanctions imposed on Russia, through dis-cooperation with Russia, China is maintaining that, there are no limits or forbidden areas of cooperation.

According to the Chinese Foreign Minister Wang Yi, “China and Russia jointly oppose attempts to revive the Cold War mind-set or provoke ideology-based confrontation. The friendship between Chinese and Russian peoples is rock solid.”

This has sparked suspicion in the West, that China may aid Russia and undermine the West’s efforts in Ukraine. As a consequence, a meeting was held Monday 14/03/1022, between the U.S. National Security Adviser Jake Sullivan, and China’s top diplomat Yang Jiechi in Rome.

Although details of the meeting are yet to be known, China wants to portray itself as a neutral party, stressing that “all countries’ legitimate security concerns should be addressed.”

China’s decision not to go along with the sanctions leveraged by the US and its allies against Russia, and its amplification of what the West consider the Russia misinformation, is making the West extremely uncomfortable, particularly the US.

From all indications, the meeting may not achieve much in the West’s crush to crush Russia, because America has started with the language of threat, by warning China that it would “absolutely” face consequences if it helped Russia evade sweeping sanctions over the war in Ukraine.

Although both sides have denied it, it is said that Russia had asked China for military equipment to support the operation in Ukraine. And because of its crush-to-crush Russia, America is of the opinion that doing that may undermine Western efforts to help Ukrainian forces defend their country.

The sanctions imposed on Russia by the West include the blocking of assets subject to U.S. jurisdiction, limits on access to the U.S. financial system, including limiting or prohibiting transactions involving U.S. individuals and businesses, and denial of entry into the United States.