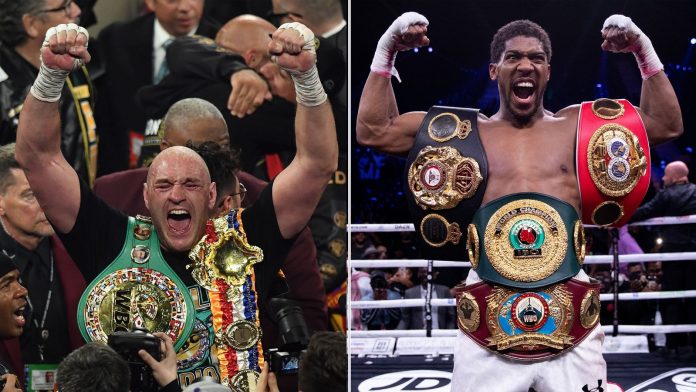 US boxing legends, Mike Tyson and Floyd Mayweather have given their predictions on who they think may emerge victorious in a potential all-British clash between Anthony Joshua and Tyson Fury.

It is not a sure thing yet that the two will meet.

WBC holder, Fury, 32, is set to complete his trilogy of fights with Deontay Wilder in December or early 2021. And he has agreed a two-fight deal with Joshua, nursing a unification ambition after Dillian Whyte’s shock KO defeat to Alexander Povetkin.

Joshua, on the other hand, is set to defend his championship crown against IBF mandatory challenger, Kubrat Pulev, by December.

But then, Joshua’s path to a mega-unification bout with Fury could be derailed if the WBO asks him to take on Oleksandr Usyk.

Tyson, 54, believes that Fury would beat Johua in a unification fight after branding him the “best heavyweight champion of the world since myself.”

“He is the man, I don’t care what anybody says. I know this is going to sound ignorant, he can say what he wants to say.

“You know who are going to look up to him? The people who never thought they had a chance in their life”, says Tyson in obvious reference to the way Fury dusted himself up after a stint with drugs.

Mayweather, who retired from boxing in 2017 with a 50-0 record, praised both Tyson and Joshua for their fighting abilities but declined to name a better boxer among the two, saying it is “none of my business” over who wins in their fight if he is “not getting paid.”

As Tyson, Mayweather predict winner in Fury, Joshua Tyson, who among the two would you bet on?