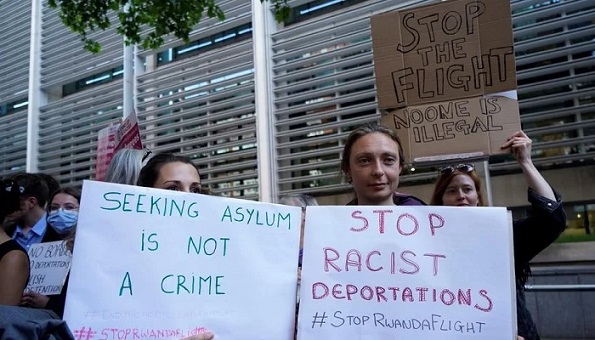 “There are serious risks that the international law principle of non-refoulment will be breached by forcibly transferring asylum seekers to Rwanda,” said Siobhán Mullally, the UN Special Rapporteur on trafficking in persons, especially women and children.

“People seeking international protection, fleeing conflict and persecution, have the right to seek and enjoy asylum – a fundamental tenet of international human rights and refugee law,” she said.

The Special Rapporteur welcomed urgent interim measures by the European Court of Human Rights that grounded a flight earlier this week, due to transfer a small group of asylum seekers to the central African nation.

“Transferring asylum seekers to third countries does nothing to prevent or combat human trafficking, in fact it is likely to push desperate people into riskier and more dangerous situations,” Ms. Mullally said. “Rather than reducing trafficking in persons, it is likely to increase risks of exploitation.”

“There are inadequate safeguards to ensure that victims of trafficking or persons at risk of trafficking are identified, given assistance and ensured effective access to international protection. They risk further victimisation and trauma by being transferred to a third country,” added the Special Rapporteur.

“I am also concerned that there are insufficient guarantees against risks of trafficking or re-trafficking for those who may be denied asylum, or arbitrarily removed to another state from Rwanda”.

Ms. Mullally echoed concerns by the UN High Commissioner for Refugees about difficulties that arise in disclosing traumatic experiences – such as trafficking – in screening interviews for asylum seekers, usually conducted shortly after arrival.

Under the arrangement, UK authorities will conduct an initial screening before deciding on whether an individual may be transferred.

The independent expert said the initial screening was not sufficient to identify and recognise the specific protection needs of asylum seekers, including victims of trafficking.

The Special Rapporteur has previously raised her concerns regarding the Nationality and Borders Bill, and its potential adverse impact on the human rights of victims of trafficking.

She has also repeatedly raised concerns with the international community, about the increasing tendency to place migration within a criminal law enforcement paradigm.

“Restrictive migration-related measures are presented as part of efforts to combat organized crime, including trafficking in persons, regardless of how the measures may affect the human rights of migrants and trafficked persons,” the UN expert said.

She urged States to expand pathways for safe, orderly and regular migration without discrimination, in order to combat trafficking in persons.

She called on all States to uphold their international obligations regarding the principle of non-refoulement in international law, which guarantees that no person should be returned to a country where they could face irreparable harm.

“We must not allow the objective of combating human trafficking to be misused, in an attempt to undermine the right to seek and enjoy asylum from persecution, and the principle of non-refoulement”, she concluded.

Special Rapporteurs report to the Human Rights Council and operate in their individual capacity. They are not UN staff and are not paid for their work.

Share your thoughts on the story UN expert urges UK to halt transfer of asylum seekers to Rwanda with Nigerian Sketch in the comments section.