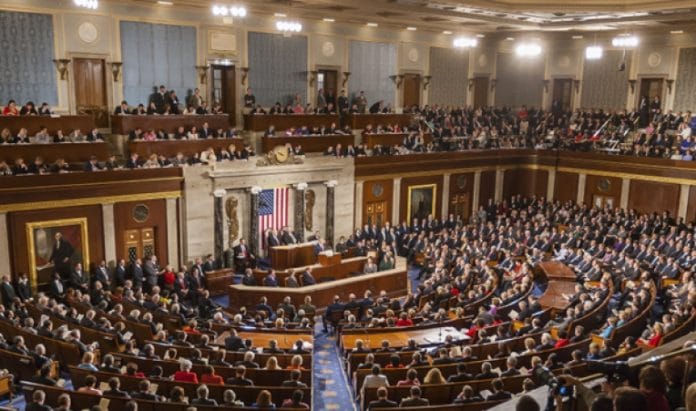 The US Senate voted 93 to 6 against the Republican-led objection to Arizona’s 11 Electoral College votes going to President-elect Joe Biden, Mail Online reports.

A short time later, the House of Representatives took the same vote, and while the effort failed, more the half of House Republicans voted in favor of the objection – a move President Donald Trump has been pressuring them to take.

The final House vote was 303 against the objection, which included 220 Democrats and 83 Republicans.

Yet 122 GOP House members voted in its favor, including the party’s leader, Rep. Kevin McCarthy.

And then another, to Michigan’s count – offered by QAnon promoter Rep. Marjorie Taylor Greene of Georgia – was also shot down, because it failed to gain Senate support.

The same happened with an objection to Nevada’s Electoral College vote count.

Cheers greeted the announcement each time.

The Constitution mandates that Congress meet on January 6 to certify the results of the presidential election. The states are read alphabetically and the votes tallied.

Before the MAGA mob rioted in the halls of Congress Wednesday, Rep. Paul Gosar, an Arizona Republican, filed the first objection of the day and was joined by a group of GOP senators – sending lawmakers back to their respective chambers for two hours of debate and then votes.

But the pro-Trump rioters held up the separate House and Senate debates for hours, with the Senate finally resuming its session after 8 p.m. and the House a short time after.

A dozen or more Republican senators had said they would join House members in objecting to a number of states’ Electoral College results, repeating President Donald Trump’s claims and conspiracy theories about election fraud.

That number dwindled down to a ‘dirty half-dozen’ with a number of senators abandoning the effort after Trump supporters stormed the U.S. Capitol Building Wednesday afternoon – breaking windows, tussling with police and ransacking Congressional offices.

One female Trump supporter was shot and killed.

Hawley, who was the first senator who pledged to back a House GOP effort to object to certain states’ Electoral College vote counts, refused to abandon the effort entirely.

The Missouri Republican argued that the Senate floor was the appropriate place to address any election fraud concerns – as opposed to a violent riot.

‘Violence is not how you achieve change,’ Hawley said. ‘And that’s why I submit to my colleagues that what we’re doing here tonight is actually very important. Because fo those who have concerns about the integrity of our elections … this is the appropriate means, this is the lawful place, where those objections and concerns should be heard.’

He said he hoped the Senate could address concerns ‘peacefully, without violence, without attacks, without bullets.’

Hawley then indicated that he might not file objections after the debate over Arizona was complete, bringing up the issues he had with Pennsylvania during his brief floor speech.

‘And so Mr President let me just say now, that briefly, in lieu of speaking about it later,  a word about Pennsylvania – this is a state that I have been focused on, objected to,’ Hawley said.

He then went on to complain that the state set-up ‘universal mail-in balloting.’

‘And did it irregardless of what the Pennsylvania Constitution says,’ Hawley said, using the improper word for regardless.

The senator then objected to how the Pennsylvania Supreme Court made its decision, holding up the law that allowed for enhanced mail-in voting during the coronavirus pandemic.