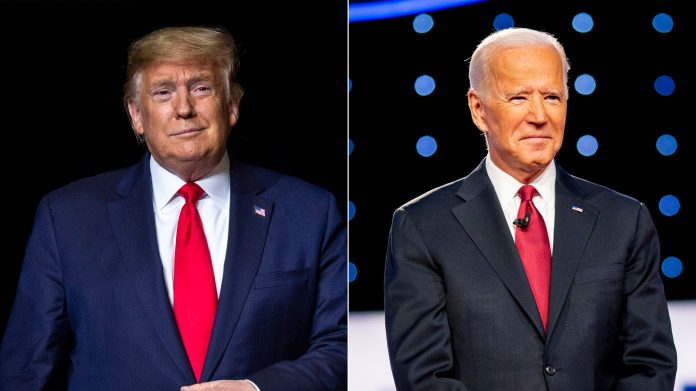 The world waits in anticipation to know who the next president of the United States would be.

The outcome of this US presidential election is on a knife edge, with Donald Trump so far doing much better than the pollsters predicted, BBC has suggested.

Both Mr Trump and his Democratic challenger Joe Biden are running neck and neck in a number of swing states.

The president has a narrow lead in the must-win state of Florida – a major boost to his re-election bid.

But his Democratic challenger Joe Biden could snatch Arizona, a once reliably conservative state.

Other key states such as Georgia, Pennsylvania, Wisconsin, Michigan and North Carolina are toss-ups.

More than 100 million people cast their ballots in early voting before election day on Tuesday – setting US on course for its highest turnout in a century.

Control of Congress is also at stake. As well as the White House, Republicans are vying to hang on to a Senate majority.

Republicans have lost a Senate seat in Colorado, but gained one in Alabama.

Mitch McConnell, the Republican Senate leader, and Trump ally Lindsey Graham have both been re-elected.

The House of Representatives is expected to stay in Democratic hands.

With partial results in, Mr Biden has a solid lead in Arizona. Fox News has projected Mr Biden will win that state and CBS News, the BBC’s US partner, said it was leaning the Democrat’s way.

But the Trump campaign said it was too early to declare a winner in Arizona. A loss for Mr Trump in that once reliably Republican state would be a potentially serious setback.

Another sunbelt state, Texas, is leaning Mr Trump’s way, according to CBS News. Fox has forecast that Mr Trump will win the Lone Star state.

The battlegrounds in the Midwest and Rust Belt of Pennsylvania, Michigan, Iowa and Wisconsin look as though they could go either way.

Pennsylvania, along with Florida, is considered a must-win for Mr Trump if he is to stave off defeat.

Cliffhanger counts are also under way in two more critical swing states on the East Coast, Georgia and North Carolina.

No surprises have emerged yet in the other states.

Mr Trump will keep hold of Ohio and Missouri, known as a bellwether states because they have so often predicted the eventual winner, according to the BBC’s projection.

Mr Trump narrowly lost Minnesota in 2016 and his campaign is hoping to pick it up this time.

National opinion polls gave a firm lead to Mr Biden, but pointed to a closer race in the handful of states that are likely to decide the outcome.

Projections are based on a mixture of exit poll data and, in most cases, actual votes counted – and are only made where there is a high degree of certainty.

In the US election, voters decide state-level contests rather than an overall, single, national one.

As the minutes turn into hours on election night, Joe Biden has posted early leads in several swing states that would help clear his path toward the White House.

Donald Trump needs both Ohio and North Carolina in his column for his electoral maths to work out, but Mr Biden has modest leads in both states with more than half of all voters reported.

Democrats shouldn’t count on those margins holding up, however. As predicted, the early and mail-in votes trended toward Mr Biden, while the election-day results have favoured Mr Trump.

As more and more of those in-person votes are counted, the president will slowly, inexorably claw his way back. It’s just a question of whether there are enough votes left to count.

Meanwhile, Mr Trump leads in Virginia, but the count there always trends Republican early, until the heavily Democratic suburbs of Washington DC, report their results.

How will the election work?

To be elected president, a candidate must win at least 270 votes in what is called the electoral college. Each US state gets a certain number of votes partly based on its population and there are a total of 538 up for grabs.

This system explains why it is possible for a candidate to win the most votes nationally – as Hillary Clinton did in 2016 – but still lose the election.

Control of the Senate is also at stake in these elections, with the Democrats seeking to gain control of both houses of Congress and the White House for the first time since early in Barack Obama’s first term.

Who decides which candidate wins a state?

The final election results don’t get certified for days or even weeks, so it falls to US media organisations to predict, or project, the winner in each state much sooner.

Teams of election experts and statisticians analyse a mixture of information such as exit poll data – interviews at polling stations and phone calls with early voters – and actual votes counted. In a state that always votes for one party, the results are sometimes projected as soon as voting ends, based on exit polls. In a closer contest, however, the data will draw heavily on the actual count.

When will result be ready?

It can take several days for every vote to be counted after any US presidential election, but it is usually pretty clear who the winner is by the early hours of the following morning.

However officials are already warning that we may have to wait longer – possibly days, even weeks – for the result this year because of the expected surge in postal ballots.

Different states have different rules for how – and when – to count postal ballots, meaning there will be large gaps between them in terms of reporting results. In some states it will take weeks to get complete results.

The last time the result was not clear within a few hours was in 2000, when the winner, George W Bush, was not confirmed until a Supreme Court ruling was made a month later.