Kim Kardashian and Pete Davidson have split up after nine months of dating, according to reports.

The reality TV star and comedian decided to go their separate ways earlier this week due to their demanding work schedules, E! News reported.

Sources told the news organisation that the duo still had “a lot of love and respect for each other” but their work commitments had “made it really difficult to maintain a relationship”.

Rumours of the couple’s romance began back in October, when Kardashian hosted Saturday Night Live and kissed Davidson during a sketch. A month later, they publicly confirmed their relationship and have appeared together at a number of events, including the Met Gala.

Davidson has recently been working in Australia, filming for a new film called Wizards!, while Kardashian has remained in the US.

The businesswoman was previously married to rapper Kanye West, and they share four children together – North, Psalm, Chicago and Saint.

Sky News has reached out to representatives of Kim Kardashian and Pete Davidson for comment.

The news comes as a surprise after a whirlwind romance between the 41-year-old businesswoman and mother of four and the 28-year-old comedian. The duo seemed rock solid, with Pete making an appearance on The Kardashians and getting tattoo tributes, and the former couple sharing major PDA and even heading to the White House together.

Even just last week, US Weekly was reporting that the former couple were “still very smitten with each other” and “can’t get enough of each other”. So, what went wrong?

Seemingly, their demanding schedules and the pressures of long-distance love are to blame.

Yet details of how the former partners handled the pressures of being apart seemed positive, with a source reportedly telling the press; “When they are apart, they are in constant communication. Kim loves that he’s always making her laugh and he truly makes her day when they talk.” However, seemingly the time apart was just getting too much. 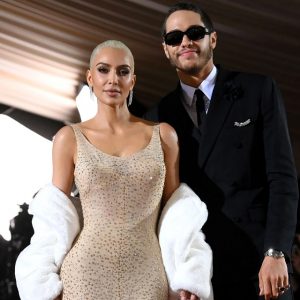 Reportedly, the breakup occurred sometime last week, even if news only reached the press last night. Sources spoke to E! News to say that the duo’s busy lives and differing timezones “made it really difficult to maintain a relationship.”

However, there is still some good news. The outlet also reports that the couple still does have “a lot of love and respect for each other”. At least they’re leaving things on good terms.

Share your thoughts on the story Why Kim Kardashian, Pete Davidson split after nine months of dating with Nigerian Sketch in the comments section.