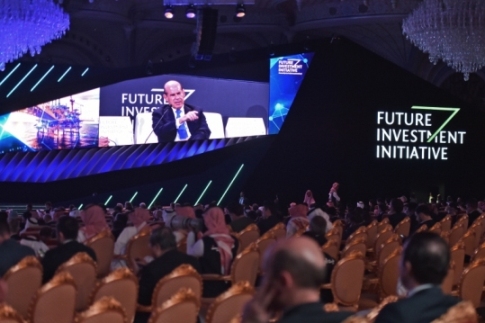 Chief Executive Officers, central bank chiefs, investors and policymakers on Tuesday exchanged views on the verdict on cryptocurrency products and funds on the first day of the Future Investment Forum in the Saudi capital.

The three-day forum, which is themed “Invest in Humanity,” includes talks on artificial intelligence, robotics, education, healthcare and sustainability.

Taking part in a session on Tuesday, Fahad Al-Mubarak, the governor of Saudi Arabia’s central bank, said SAMA should have no involvement with crypto-assets as many of those who deal in them are criminals.

He did not foresee the destruction of the banking system by digital currencies but rather an expansion of centralized systems for regulating tender.

Bitcoin is the leading digital currency trading internationally, followed by Ether and Solana.

The three-day forum, which is themed “Invest in Humanity,” includes talks on artificial intelligence, robotics, education, healthcare and sustainability. Regulators are still playing catch-up when it comes to how cryptocurrencies should be governed, Al-Mubarak said.

Having made his point, he noted that there has been a sharp jump in online banking during the coronavirus disease pandemic.

“Before the pandemic, only 35 percent of bank transactions were electronic,” he said. “Now it’s around 55 percent.”

Hussain Abdulla, co-CEO of Qatar-based investment bank QInvest, said cryptocurrency products were not yet Shariah-compliant, and more understanding was needed.

Nevertheless, he warned that the Middle East is lagging way behind the US and Europe when it comes to digitization of the banking industry.

“Winners in the banking industry will be those who take steps today toward digitization rather than later,” Abdulla said.

Several prominent business people who took part in FII sessions on Tuesday said leading investors still view gold and the dollar as a safer haven for investments than bitcoin.

Both Larry Fink, CEO of BlackRock, the world’s largest asset manager, and David Solomon, chairman and CEO of the Goldman Sachs Group, said they preferred investments in US dollar over bitcoin.

Ray Dalio, founder and co-chairman of Bridgewater Associates, opted for gold over bitcoin.

In the past week, the crypto industry has seen inflows to the tune of $1.5 billion, amid soaring optimism with the trading of bitcoin exchange traded funds.

Inflows so far this year hit $8 billion, far exceeding the record set for the whole of 2020 of $6.7 billion, according to data from a report released by digital asset manager CoinShares on Monday.

The bulk of inflows for the sixth straight week went to bitcoin, with $1.45 billion, data showed. Inflows year-to-date amounted to $6.1 billion.

With more than 250 expert speakers from the economic, business, education and corporate worlds, discussions at the FII, dubbed the “Davos in the Desert,” have centered on investments that aim to create the greatest benefits for humanity.

Solomon said there must be clarity regarding indicators of economic recovery and action plans, and this contributes to attracting investments and facilitating the movement of funds.